From hero rats to blind dogs to empathic elephants, animals play vital and remarkable roles in the fight to protect wildlife
By Graeme Green 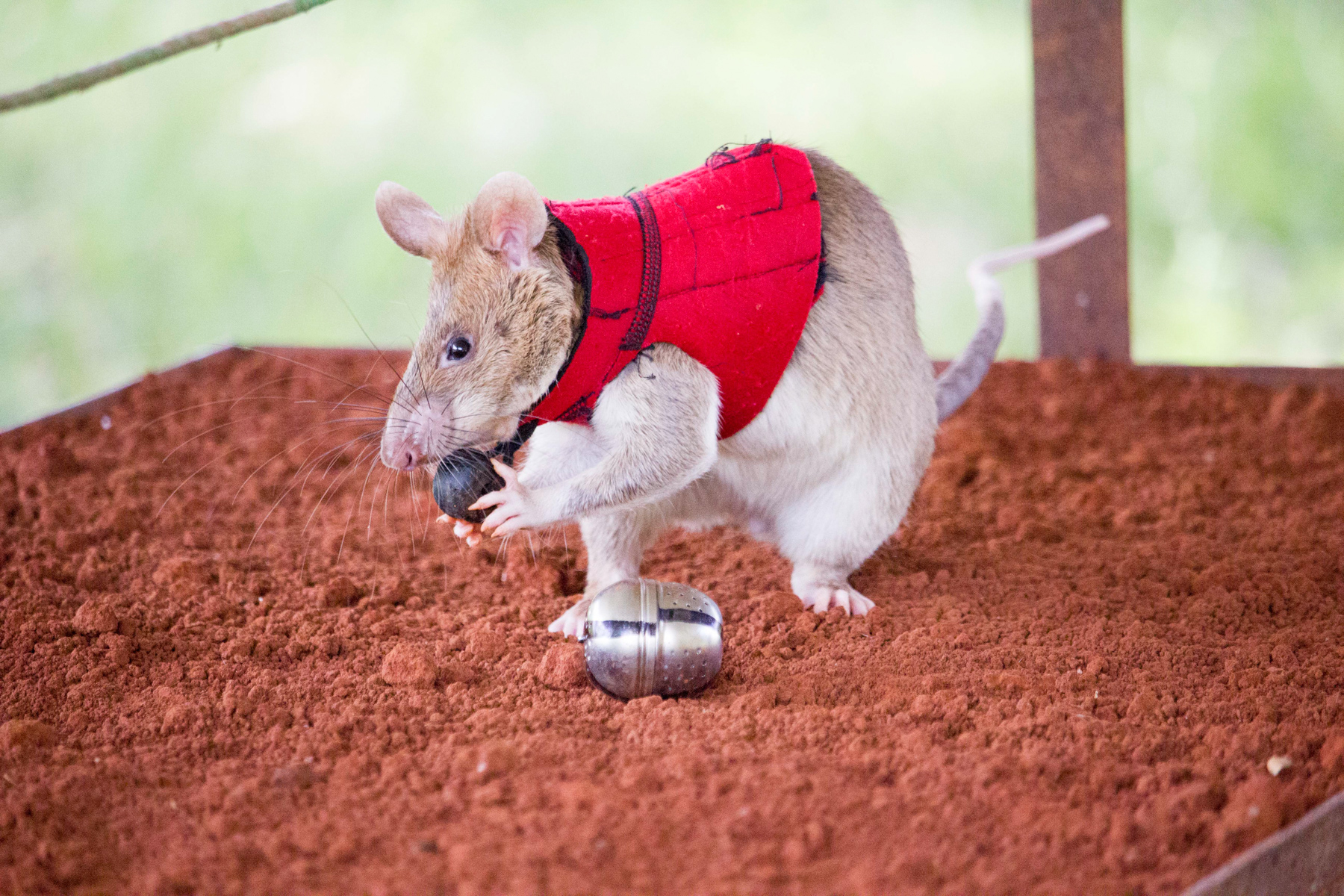 “Attenborough is very gentle and patient,” says Dr Cindy Fast. “He’s a quick learner.” Those qualities might apply to the more famous (David) Attenborough, presenter of globally popular natural history programmes. But in this case, Fast is describing a rat.

Attenborough is part of an elite squad of Hero Rats, along with Betty, Desmond, Fossey, Thoreau, Doreen and more, who are being employed to help stop pangolins from becoming extinct. It’s estimated 200,000 pangolins are killed each year, the world’s most trafficked mammal sold across Africa and Asia for their meat and for their scales, which are used in traditional Asian medicine (despite having no medicinal properties).

An innovative project from APOPO Hero Rats, working with Endangered Wildlife Trust and supported by Pangolin Crisis Fund, sees rats being trained to sniff out smuggled pangolin scales. “Generally speaking, with any task that relies on a very acute sense of smell, a rat will outperform a human,” says Fast, head of training for the rats. “In terms of countering wildlife trafficking, rats might have an advantage over sniffer dogs in some scenarios. Because of their smaller size, rats can more easily access tightly packed spaces within shipping containers or be easily elevated to sniff the vents of stacked containers.”

Young rats start basic training with an odour target that’s later replaced with wildlife products, including pangolin scales and hardwood. Attenborough excels at his work. “He’s one of the most dependable superstar sniffer rats working on this project,” says Fast. “He’s calm and relaxed, and likes to take naps lying on his back, but he gets excited whenever he smells food or his wildlife targets.”

Rats are used for other jobs including sniffing out landmines and tuberculosis. To further combat wildlife trafficking, it’s hoped they could be deployed to airports, seaports and border crossings in future. “In addition to shipping ports, the rats could work well in airports to help screen passenger luggage, or in partnership with shipping companies to screen packages and parcels. They could also probably help search vehicles at borders or national parks.”

More than a million species of animal and plant are at risk of extinction, and animals are increasingly being brought into solutions and strategies, working alongside rangers, researchers, scientists, vets and keepers. In Argentina, the Wildlife Conservation Society (WCS) has been using specially trained ‘guardian dogs’ to work with herders in Patagonia to keep livestock safe. The dogs watch over herds of domestic goats and sheep, keeping predators away. As a result, herders don’t shoot, poison or trap wildlife, such as pumas, pampas cats, Patagonian foxes and Andean condors, in retaliation.

The dogs, a mix of Anatolian shepherd and Great Pyrenees, are brought in as puppies to create a familial connection. “The bond between dogs and livestock is really strong,” explains Martín Funes from WCS Argentina. “Livestock’s always around, so they can smell them, hear them and see them. At about Day 40, they start to have physical contact. The bond gets stronger over the next three months, and dogs start to show protective behaviour towards livestock. After this period, dogs will recognize livestock as their social group, and that will remain for the rest of their lives.”

The results of this bonding is impressive. “Most of the times, predation rate decreases to almost zero,” says Fuenes. “The presence of a guardian dog is usually enough to keep predators away, so physical contact with a wild carnivore is very unusual. Livestock guarding dogs (LGDs) stay with livestock all day, every day. They behave as part of the flock, and they’ll protect it against any potential threat. This is a relatively new concept for this geographical area, but its effectiveness is making it spread swiftly.”

Around the world, dogs are essential to conservation efforts. “There are simply things that wouldn’t be possible without dogs, from tracking down poachers and stopping them before they kill an elephant to detecting the invisible larvae of invasive mussels that cause billions of dollars in damage,” says Pete Coppolillo, Executive Director of Working Dogs For Conservation (WDFC). “Humans simply can’t do these things on their own, so dogs really are game-changers.”

Dogs are vital to the work of ranger patrols and anti-poaching units across Africa and worldwide. “Anti-poaching without dogs is like counter-narcotics without dogs,” Coppolillo explains. “It’s a lot less effective.  Imagine a bus on the roadside in Africa, overloaded with people and cargo. It would take game scouts hours to unload and inspect it thoroughly. Imagine two or three or five of those busses lined up. What inevitably happens is the rangers have to guess which vehicle might be carrying illegal ivory, rhino horn, guns or ammunition. A dog can do that job in minutes, making it possible to search every vehicle every time.”

Coppolillo picks out a dog called Ruger as an outstanding canine hero. “Ruger was an amazing character. Like all our dogs, he was rescued. As he trained, his serious drive and focus to be a detection dog became clear, as did the fact he was losing his eyesight. Ruger was almost completely blind when he became one of the first two conservation dogs into Zambia, but that didn’t stop him from being one of the most accomplished ever. Over his career, he put hundreds of poachers out of business by detecting and enabling the seizure of illegal guns and ammunition.”

Like the people risking their lives to combat poaching and trafficking, the dogs’ safety is sometimes at risk. “Law enforcement can be dangerous, but we work hard to keep the dogs out of harm’s way,” Coppolillo says.

Dogs and their noses have been put to use in diverse roles beyond poaching and anti-trafficking, including locating stranded koalas during Australia’s bushfires. “It’s astounding how many strange jobs dogs can do,” says Coppolillo. “A number of our dogs are helping to eradicate an invasive weed in Montana, which was inconceivable a few years ago. They do it by finding the plant before it flowers, which allows their handlers to remove the plants.

“Another example is helping us monitor diseases and contaminants in aquatic ecosystems. Our dogs find mink and otter scats that are difficult for humans to locate. Coupling the dogs with new laboratory techniques allows us to know whether flame retardants, pharmaceuticals, heavy metals, and even some diseases are present in the scats.”

Animals are capable of being trained to complete tasks. But they’re also capable of empathy and voluntarily taking on the care and protection of other animals, as seen with orangutan surrogate mothers caring for orphaned orangutans.

At Wild Is Life Zimbabwe Elephant Nursery, outside Harare, Zimbabwe, an adult female called Moyo has taken on the role of caring for new rescued orphans, including injured or traumatised elephants, significantly increasing their chances of survival. Moyo was herself a rescued elephant, found in a crocodile-infested creek, her mother having been killed by poachers. Keeping the tiny orphan alive took round-the-clock care from staff at the nursery, with additional companionship from Josephine, a rescue dog, and Pickles, a warthog, which helped Moyo settle.

Now fully grown, she’s an integral part of the nursery team. “We couldn’t do this job without Moyo,” says Roxy Danckwerts, founder of the IFAW-supported nursery. “Whenever we have a new calf come in, Moyo greets the calf with rumbles, squeals and trunk hugs, putting the calf at ease. Sometimes, if a calf won’t drink, Moyo will allow the calf to try and suckle from her, while we scramble underneath her, coaxing a bottle into the orphan’s mouth. If we need help or the calf is depressed, we let Moyo out to interact with the calf and give it some comfort. On her way in and out of the barn, she’ll stop and check the new calves. She sniffs them rigorously, and it’s often this that I focus on, to try and ascertain where a problem may be. If Moyo points to the mouth, we know to check for teeth eruptions.”

Danckwerts believes Moyo learned from her human carers. “Much elephant learning comes from visual observation,” she explains. “From an early age, a young animal will copy the behaviour of their elders, especially their mothers. Moyo was raised by caring humans, She saw the team looking after the animals and the attention a new calf needs, and learned that she can and should do this too. I also believe that, considering her own trauma, she’s able to recognise trauma in a new calf, picking up their anxiety and fear.”

While elephants often move in family groups and help raise the young of the herd, it’s rare for elephants to take on the care of elephants that have nothing to do with them. “The fact Moyo will accept every single calf is nothing short of miraculous,” says Danckwerts. “Other elephants can be unpredictable and dangerous with small calves, but Moyo’s shown total acceptance. These calves are incredibly delicate and fragile. Moyo’s sense of empathy reaches every calf, offering comfort, reassurance and love.”

Over time, Moyo has taken leadership of the herd. “She’ll often stop and check that everyone is present,” Danckwerts says. “I’m convinced she can count. In the bush, she’ll be constantly on alert, rumbling when it’s time to move.”

People could learn from elephants and other animals, suggests Danckwerts. “We, as humans, have so much and still seem to need so much. We’ve dominated the planet and taken so much away, giving so little back. Our mindfulness is being lost in the noise of consumerism and a throwaway culture. If we could just step back and watch, we’d see how carefully a wild elephant fits into an ecosystem: recycling, regenerating, reshaping environments. So many lives, from insects to grass to antelopes, benefit from elephants. In order for this to happen, they need to be a cohesive and socially structured unit. Elephants are incredibly thoughtful and kind animals. They take care of theirs, as well as the world around them.”