Everything you need to know about pangolins

The world's most trafficked mammal, from epic appetites to remarkably long tongues
By Keri Parker, co-founder of Save Pangolins

Shy mammals covered in tough, overlapping scales, and the most trafficked mammal in the world

Pangolin species vary in size from about 1.6 kg (3.5lbs) to a maximum of about 33kg (73 lbs). Male and female pangolins differ in weight. In most pangolin species, males are 10-50 percent heavier than females. When born, pangolins are about six inches long and weigh about 340 grams (0.75 lbs).

It’s unknown how long pangolins can live in the wild, though pangolins have reportedly lived as long as 20 years in captivity.

Pangolins are found in a variety of habitats, including tropical and flooded forests, thick brush, cleared and cultivated areas, and savannah grassland.

Pangolins dig deep burrows for sleeping and nesting that contain circular chambers. Large chambers have been discovered in terrestrial pangolin burrows that are big enough for a human to crawl inside and stand up.

Some pangolin species, such as the Sunda pangolin, also sleep in the hollows and forks of trees and logs.

Pangolins live predominantly on a diet of ants and termites, which they might supplement with various other invertebrates, including bee larvae, flies, worms, earthworms, and crickets. This specialist diet makes them extremely difficult to maintain in captivity, as they often reject unfamiliar insect species or become ill when fed foreign food.

Wild pangolins locate insect nests using a well-developed sense of smell. Using their claws to voraciously dig ants and termites from mounds, stumps and fallen logs, they then use their extremely long sticky tongues to capture and eat them.

Pangolins reach sexual maturity at two years. Most pangolins give birth to a single offspring, though two and three young have been reported in the Asian species.

Pangolin mothers nurture their young in nesting burrows. A mother will protectively roll around her baby when sleeping or if threatened. Babies nurse for three to four months, but can eat termites and ants at one month. Infant pangolins will ride on the base of the mother’s tail as she forages for insects.

Pangolins are solitary. Most are nocturnal and highly secretive. Therefore, it’s difficult for scientists to study them in the wild. Many mysteries remain about their behaviour and habits. Some species, such as the Chinese pangolin, sleep in underground burrows during the day, and others, including black-bellied pangolins and Sunda pangolins, are known to sleep in trees. They emerge in the evening to forage for insects. Pangolins are well adapted for digging – they dig burrows with their strong front legs and claws, using their tails and rear legs for support and balance.

While pangolins species share many characteristics and habits, there are also differences. White-bellied pangolins are arboreal tree-climbers, while ground pangolins are terrestrial ground-dwellers. Indian pangolins found in Sri Lanka live in the rainforest canopy where fruit and flowers that attract ants can be found, instead of at ground level where it’s dark and the food supply’s limited. Some pangolin species even have semi-prehensile tails – they can grasp and hang from branches with their tails, which aids them in climbing.

Pangolin scales provide good defence against predators. When threatened, pangolins can quickly curl into a ball, protecting their defenceless undersides. They also deter predators by hissing and puffing, and lashing their sharp-edged tails. Pangolins are dependent on their strong sense of smell and can identify their territories by scent-marking with urine and secretions from a special gland, and by scattering faeces. Scientists suspect that these odours advertise dominance and sexual status, and may also help individuals recognize each other.

Pangolins’ insatiable appetite for insects gives them an important role in their ecosystem: pest control. Estimates indicate that one adult pangolin can consume more than 70 million insects annually.

Pangolins have amazingly long, muscular and sticky tongues that are perfect for reaching and lapping up ants and termites in deep cavities. When fully extended, it is longer than the animal’s head and body.

A pangolin’s stomach is muscular and has keratinous spines projecting into its interior. Usually containing small stones, the stomach mashes and grinds prey in much the same manner as a bird’s gizzard.

How Many Pangolins Are On The Planet Today?

We don’t know how many pangolins there are, and there’s a critical need for research on populations. It’s difficult to estimate how many individuals remain of the eight pangolin species because they’re increasingly rare, secretive, elusive and, with the exception of the black-bellied pangolin, primarily nocturnal.

Population declines are inferred in various places based on the knowledge of local community members and indigenous peoples and from shifting trade dynamics, both legal and illegal. It’s estimated that there have been massive declines of this species due to poaching for local use and for regional and international trafficking. According to the IUCN Red List of Threatened Species in 2019, recent estimates are available for certain parts of pangolin species ranges, such as Singapore, where there are thought to be roughly 1068 Sunda pangolins, and in South Africa, where there are estimated to be between 16,329–24,102 mature Temminck’s pangolins.

The Greatest Threats To Pangolins…

All eight species of pangolins are threatened with extinction. In just ten years, more than one million pangolins have been illegally traded, which makes them the most trafficked mammals in the world.

Pangolins are killed and trafficked in great numbers because their scales are used in traditional Asian medicine, their meat is considered a luxury food in many parts of Asia, and their skins and other parts are used for various purposes such as fashion. As a result, there’s a rampant illegal global trade in pangolins and their parts. The demand comes principally from China and Vietnam. Rapid loss and deterioration of available habitat places added pressure on the dwindling numbers of remaining pangolins.

Relatively little is known about the illegal trade, which makes combating it that much more challenging. Inadequate public and governmental awareness of pangolins and the trade add to the conservation challenge, as well as insufficient political will to enact enforcement of protections.

Asian pangolins, in particular, are threatened by loss of habitat, due to expanding agriculture and other human activities.

More funding and resources are needed to immediately halt this illegal trade. Broadening conservation efforts is critical to the survival of this remarkable group of animals.

Share this article on social media, and tell your friends and family about pangolins. In recent years, more people around the world have learned about pangolins and the threats to them. This has directly led to more support for policy reform, scientific research, and more conservation efforts. You can help by spreading the word about pangolins and how they’re in trouble.

If you see pangolins and other illegal wildlife in restaurants or other business establishments, contact your local authorities or one of the numbers on this webpage.

You can also find out more about the threats pangolins face at Pangolin Crisis Fund: pangolincrisisfund.org. 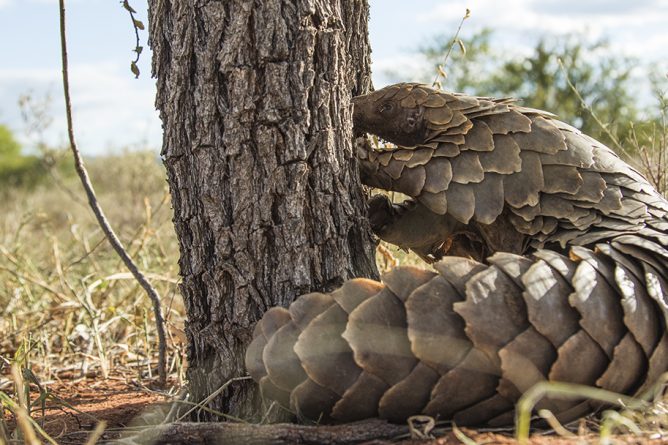 Inside the illegal wildlife trade
From elephants to pangolins, animals are being killed in “the conservation crisis of our generation”. Can they be saved?