Everything you need to know about rhinos

The iconic, horned giants, from high speed running to how many animals are left
By Cathy Dean, Director of Save The Rhino International 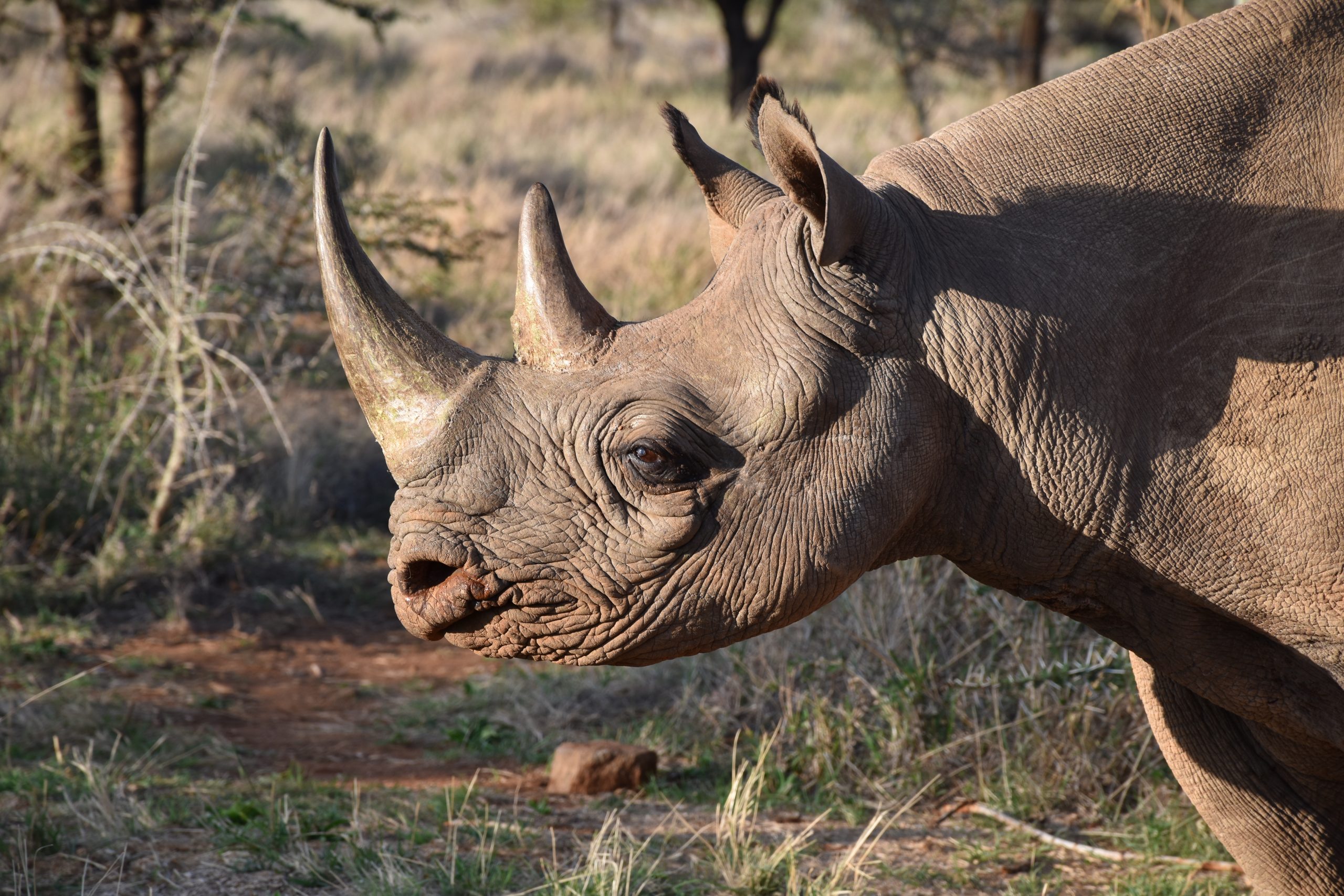 Each of the five rhino species vary in size, with males tending to be larger than females. The smallest species is the Sumatran rhino, which lives in Indonesia and weight around 500-800 kg, with a shoulder height of 1-1.5m. The largest species is the white rhino, weighing 1,800kg to 2,500kg, and standing at about 1.8m tall.

On average, rhinos live to between 40 and 50 years old. Females tend to mature faster than males, at around four to seven years old, whereas males mature a little later, between eight to twelve years old.

In Asia, there are three rhino species (Javan, Sumatran and Greater one-horned rhinos). Each of these rhinos live in specific areas: Greater one-horned rhinos are found in the foothills of the Himalayas in Nepal and India; Sumatran rhinos are now found only on the islands of Sumatra and Borneo, in small isolated populations; Javan rhinos are all found in one place, Ujung Kulon National Park, on the western tip of the island of Java.

Every rhino species has different needs for their ideal habitats. Black rhinos, for example, are browsers, and need more trees and shrubs to find leaves to eat, while white rhinos graze on different grasses on the ground. The Asian species tend to live in wetter, more tropical forest environments.

Overall, they all need enough space to have a successful life, which means finding enough food, having good water sources, being close enough to mates and being able to raise their young.

Rhinos are big animals and require a lot of food to keep them going. All species are herbivores (they only eat plants) and have different favourite food items.

Javan rhinos eat a hugely diverse set of plants, with many hundreds of species recorded in their diet.

Sumatran rhinos also enjoy a diverse diet, eating on average 50 to 60 kg (approximately 10 per cent of their body weight) each day.

One special group of rhinos is the desert-adapted black rhino in Namibia. This population is known for going without water for days. Not only do they need little water, but they’ve also found a way to eat and digest usually toxic plants. By consuming these leaves, the rhinos are able to find food in an otherwise arid landscape.

Gestation tends to be 15 months or more, depending on the species. A rhino tends to only have one calf at a time, with calves staying by their mother’s side for a few years, sometimes longer if environmental conditions, such as drought, make it tough to find food and water.

At around two to four years old, a rhino calf will be ready to leave its mother’s side and begin life as a young adult.

In general, a female rhino will be able to breed every three to four years, often coinciding with the previous calf moving on to become an adult.

In Africa, rhinos are often found snoozing during the hot days, taking in some shade underneath a big tree or shrub. Rhinos can still be active during the day, but it’s thought they’re more active at night once the temperature drops.

White rhinos tend to live in groups and are more social than black rhinos, which generally live alone.

For the Asian species, they also take a good rest away from the heat, sometimes wallowing in mud baths to soothe their skin and reduce parasites.

With so few of the Sumatran and Javan rhinos left (fewer than 80 and 72, respectively), little is known about their daily habits in the wild.

White and black rhinos are actually the same colour. Despite the names, both species of African rhino have a grey skin colour. The main difference between them is their upper lip: the black rhino’s top lips is hooked, whereas the white rhino has a square lip.

There was once an ancient woolly species of rhino. Today, the Sumatran rhino is its closest living relative.

Rhinos are speed machines. Some species can run at 30-40 miles per hour, so be sure to move out of their way fast.

If you want to know the correct term for multiple rhinos, it’s a crash. A group of rhinos is known as a herd or a crash.

How Many Rhinos Are On The Planet Today?

Hundreds of years ago, there were many thousands of rhinos roaming the planet, with estimates of 500,000 rhinos living across Africa and Asia at the beginning of the twentieth century. By 1970, rhino numbers dropped to 70,000. Today, there are fewer than 28,500 remaining across all five species.

The past 10 years have been tough for rhinos, with huge increases in poaching and difficulties in finding enough suitable habitat. Thankfully, populations of all three Critically Endangered species (black, Javan and Sumatran rhinos) have all increased. However, improved counting accuracy, combined with the impact of intense poaching, shows a decreasing trend from 21,320 in 2012 to 18,067 in 2017.

The Greatest Threats To Rhinos…

Poaching: Rhinos are illegally poached for their horns, which are used within traditional Chinese ‘medicine’, despite the fact that rhino horn that no medicinal properties. It’s also increasingly seen as a symbol of status and wealth within Vietnam.

Habitat loss: As human development expands, rhinos have less space to find food, water and a mate. This is a particular concern for Javan and Sumatran rhinos, and their available habitats are very small. However, across both continents, Africa and Asia, this is an increasing threat.

Political conflict: In areas where law enforcement has become difficult, particularly in war zones, where there is political instability or corruption, rhinos may have less on-the-ground protection and poachers often take advantage of this.

If you see or hear about rhino horn being sold, don’t buy it. International trade in rhino horn is illegal, so find out the regulations for your country and report anything suspicious to the relevant authority or organisation.

Raise awareness to stop the trade in illegal rhino horn. Share this article and share the message about rhinos with your friends, family and colleagues. The more people that understand the importance of rhino conservation, the more we can drive change.

Support rhino conservation efforts. Find a project that you want to support and see how you can get involved. You could take part in an event, volunteer, become a member or make a donatation. We all have what it takes to help save the rhino.