The Indonesian conservationist on orangutan encounters, COVID-19, and why women are like wild elephants
By Graeme Green 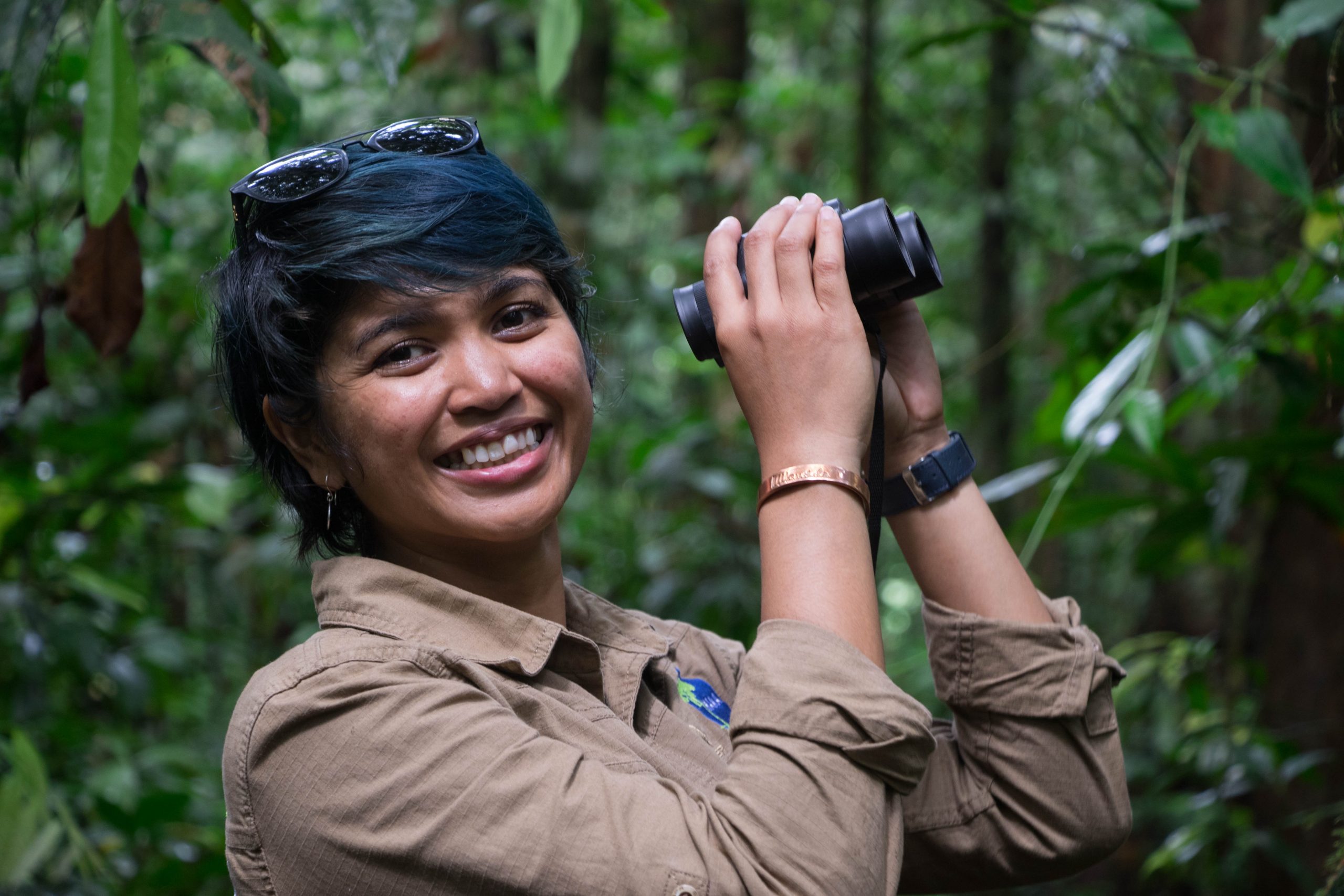 Farwiza Farhan is the co-founder and chairperson of HAkA, an NGO that works to protect the Leuser (loiser) ecosystem, 2.6 million hectares of diverse habitat in the northern corner of Sumatra, Indonesia, which is the last place on Earth where the tiger, orangutan, elephant, and rhino still roam together in the wild. She’s won several awards for her work, including Future For Nature and the Whitley Award.

What was your first experience that got you into wildlife?

I grew up watching BBC’S Blue Planet, so I wanted to be a marine biologist, which I did for the first part of my life.

Once I graduated as a marine biologist, I went diving and saw all the bleaching of coral reef in the northern corner of Sumatra. I felt desperate, like there was nothing I could do. The naive 23-year-old me thought to myself that maybe I could look at protecting forests. Maybe protecting forests is a little bit easier than protecting the ocean. The ocean felt too big and too complicated.

I wanted to be an expert on whales and mantas and turtles but I ended up becoming an expert in policy to protect forests.

Why is the Leuser ecosystem so important?

When we think of the forests of South-east Asia, we think of places like Borneo and Sumatra, and we think of wild places full of biodiversity. In reality, most of these places are gone. It no longer exists.

The Leuser ecosystem is the sort of last intact forest still left in Sumatra. It’s 2.6 million hectares, which is as big as a third of the Netherlands.

There’s incredible wildlife there, isn’t there?

Yes. We’re often caught in awe when we think about large wildlife. We think about tigers, rhinos and orangutans and elephants, even sun bears and pangolins. But there’s so much more, little, less-known wildlife that exists in Leuser. I’m sure many of those smaller creatures are yet to be discovered.

It is a paradise. Even though I grew up in Aceh, I didn’t grow up by the forest. I grew up close to the beach, so my initial encounter with the forest was full of ignorance. I had no idea what to expect. But there was a sense of curiosity.

I remember the first time I went to the Leuser ecosystem, back in 2010, which is where I had my first orangutan encounter. Those kinds of encounters are profound and hard to forget. You look at the orangutan and the orangutan looks back at you with a similar kind of curiosity.

It was a mum and a baby. They looked at us and then they left. Inside of me, there was a sense of pride that I had encountered an orangutan in the wild but also a sense of devastation, thinking that, unless we seriously do something, the species will go extinct very soon.

What are the main threats to the Leuser ecosystem?

The biggest threat is unregulated road development. In any case of a pristine ecosystem, wherever the road goes, destruction follows. If we think about encroachment, about large-scale mining operations, illegal logging or even legal ones, it would not operate without road infrastructure.

It’s quite a dilemma. We think everyone deserves access to education and healthcare. If there are people, we should give them economic opportunity, and one of the easiest ways the people with those opportunities are now building roads.

But at the same time, roads also create fragmentation. If you have a large block of forest and you put a road right in the middle of it, instantly a wildlife corridor will be cut off. Instantly tree canopies will be separated. Any type of development or exploitation will happen alongside roads, as we see in the Amazon and so many places around the world. That’s also happening in Leuser.

There’s a lot of money to be made in Leuser from logging and palm oil. Is there a lot of corruption?

You won a massive legal battle against a company that was clearing land for palm oil without permits. How important was that?

This was the first time ever any company that was engaging in forest fires in Indonesia was punished with a fine and a restoration fee. In the past, the punishment has always been against the person accused of lighting the fire, and the company itself takes no responsibility. So this was tremendous progress, and this progress could only happen because so many people got angry.

People around the world felt such a massive fury and anger and disbelief about this company’s illegal activities. The good thing about anger is that it can drive people to take action.

This company ended up facing a massive spotlight. There was a petition. There was letter-writing. There were people around the world making sure the court proceeding was just and fair. There were a lot of warnings received by the judges to remind them a lot of people were watching this case.

We were hopeful when we ran the campaign but we never expected we’d get the outcome we did. This company was eventually fined 26 million dollars (£21 million) for environmental crimes.

Do you think that sends a message out to other big companies who were engaged in illegal activity?

I think it does. In the past five years, deforestation in Leuser has declined by half. For us who aim for zero deforestation, that’s not yet ideal. But it’s much better than in so many places around the world that still continue to face the increased deforestation year after year.

You’ve helped start a female-led ranger team in Aceh. Do female rangers have a different approach to men?

Absolutely. In any initiative, when the involvement of women is made equal to the involvement of men, the success rate tends to be higher. When you think about the way rangers operate we often imagine figures of men carrying arms and ready to shoot any poachers or anyone engaging with legal activities in the forest, but women have a very different approach. The question goes, “How do you deny a mother? How do you deny a wife?” It creates such a powerful voice, a gentle but firm protector of the forest.

Rather than guns, they use communication and relationships?

Exactly. Women are underestimated, but they’re actually very powerful. I tend to think of women as like a wild elephant. When a wild elephant turns into a tamed elephant, they are made to believe that men are stronger than them, when it’s not true.

Women managing natural resources is very important because they think beyond the immediate short-term gain. They think long-term. They think of future generations. They think for the whole village.

What impact is the coronavirus (COVID-19) having in Aceh and the work you’re doing?

We’re confined in our homes and restricting ourselves from engaging with local communities, something that usually we do all the time. We’re trying to not spread the virus to the local community.

Our rangers are still patrolling because poachers and illegal loggers also haven’t stopped. There are always people who are opportunistic and will try to make use of desperate situations. I’m curious to see how much coronavirus will affect the demand around wildlife.

What are your thoughts on the pandemic?

We tend to forget the reasons why we got here. A lot of papers have been warning about the existence of coronavirus in wildlife since way back in 2007. But it’s only now, because of the breakout, that we’ve become more aware of it. I don’t know how long our collective memory will retain the danger of this virus to our society before we return to life is normal.

Some people have called coronavirus a wake-up call. What do you think?

It has given us all the opportunity to get to our corner, to sit down and think about how we treat our planet and what we could do to make sure things don’t get worse.

There are a number of predictions that talk about the extinct diseases that modern medicine has cured, but a whole lot of these viruses and bacteria are stored under the permafrost and if that gets released, more pandemics like this might come to the surface.

It’s a serious wake-up call for all of us to really think about our justice system, about our economic system, about the idea of putting the environment and economy as if it’s in two polar opposites, when it’s not. 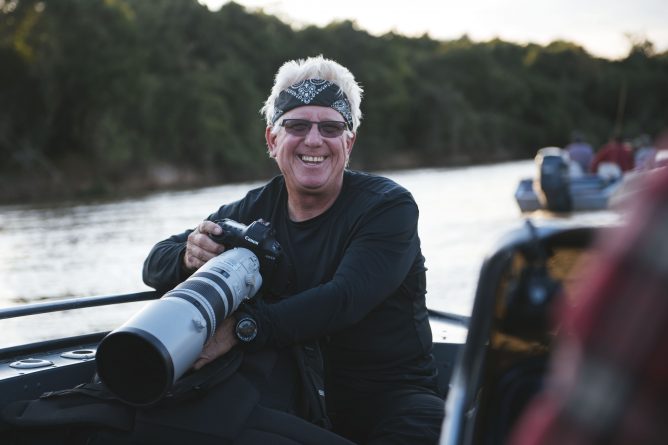