The Ugandan vet and conservationist on gorillas, Rafiki, poaching and population growth
By Graeme Green 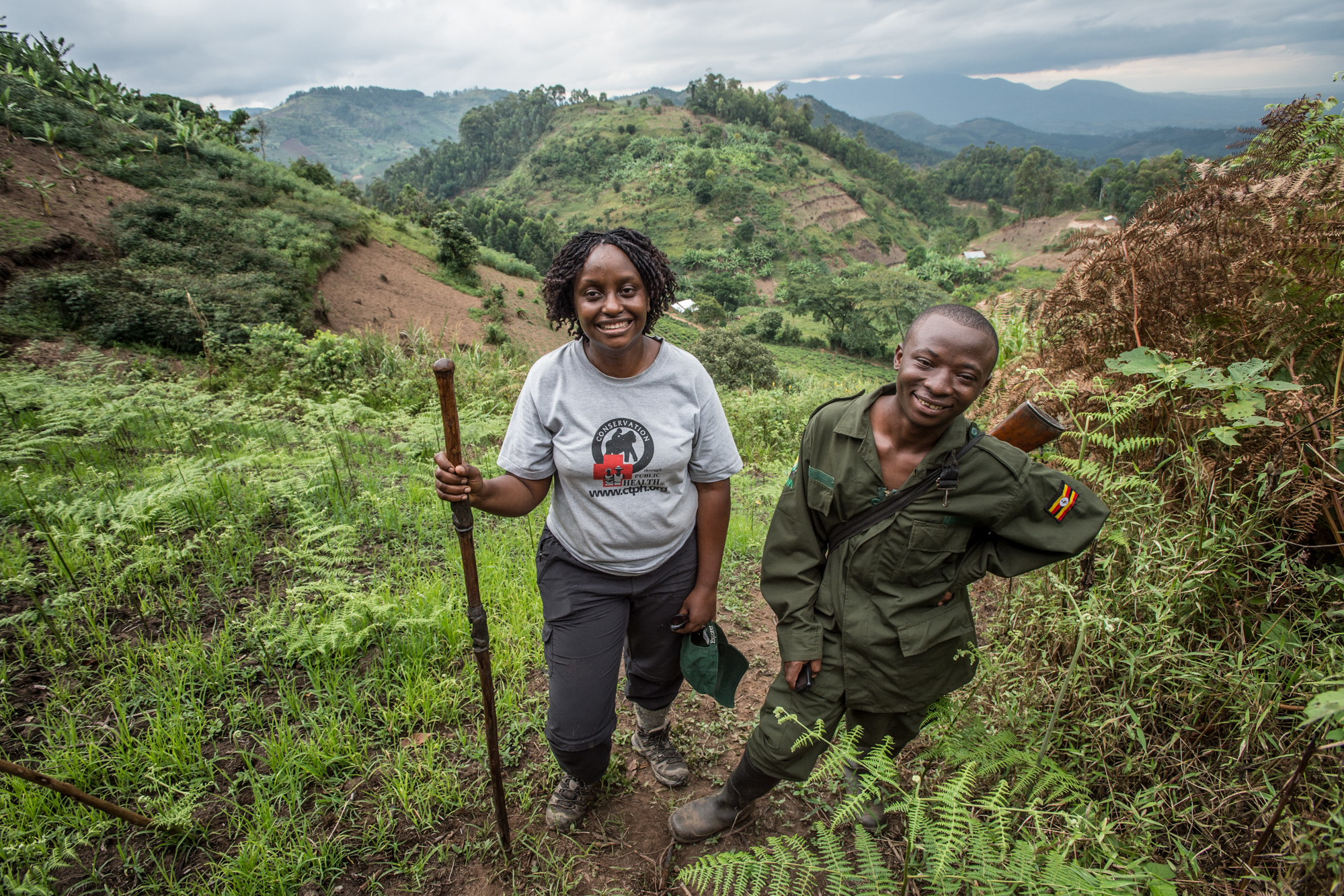 Dr Gladys Kalema-Zikusoka is a Ugandan vet and scientist working to protect East Africa’s critically endangered mountain gorillas. She’s the founder and CEO of Conservation Through Public Health (CTPH) who work to improve the quality of life for people and wildlife, so they can coexist in and around protected areas. She’s also on the leadership council of Women for the Environment in Africa.

What’s it like spending so much time with gorillas?

It’s amazing to spend time with such beautiful animals. When I visit the gorillas, I feel a really deep connection. It’s very therapeutic for me.

Every time I go to check on them, I learn something new. It’s easy to relate to gorillas. They’re so accommodating and gentle. People say chimps are what we are and gorillas are what we want to be.

Why do you feel so connected to gorillas?

Naz Ahsun wrote a book called Discover Your Power Animal, which talks a lot about spirituality and discovering our animals. Gorilla groups are very family-oriented: a silverback living with females in a harem… They’re always moving together and looking out for each other. It’s about strengthening family connections.

People around the world heard about the death of Rafiki, the silverback gorilla who was killed by a poacher last year. What impact did Rafiki’s death have on you?

Rafiki’s death really shocked me. I thought the Bwindi community was benefitting so much from tourism that they couldn’t even think about killing a gorilla. There used to be very little here, and now there are 20 lodges and lots of jobs. Gorillas helped lift the community out of poverty.

But now we know this man was very hungry. He was a bushmeat poacher. He wasn’t poaching gorillas. He was carrying meat from other species: dika, bushpig… He was among the most vulnerable in the community and he went in because he was desperate. He needed to eat and would have sold some of the meat. He came across Rafiki at close distance and got scared.

It made me realise maybe we’re not reaching everybody. It’s a wake-up call that we need to reach the most vulnerable communities. We need to go further. We need to start addressing hunger more, not just livelihoods.

How can you do that?

We started a project of fast-growing seedlings that people can grow in their garden. We’re focusing on vegetables: cabbage, spinach, beans, maize, pumpkin… If people have food to eat, they won’t need to enter the forest.

How harmful has the Covid-19 crisis been for conservation work in Uganda?

It’s been terrible. All over Africa, poaching has gone up, mainly for bushmeat, because people are hungry. That’s not just Bwindi or Uganda, but especially in the savannahs and tourist parks.

There’s less funding for conservation activities now that primate tourism’s been suspended. Gorilla tourism alone contributes 60 per cent of revenue for the Uganda Wildlife Authority and entry fees help support local communities. It’s been a wake-up call to realise how much tourism is supporting conservation.

The economic impact for people has also been huge, hasn’t it?

Yes, it’s had a devastating impact on people’s incomes. Tourism disappearing in Africa completely crashed the national parks systems, and communities were left with nothing to work with and survive on.

In Bwindi, the porters have suffered most. They used to carry bags for tourists who go to see the gorillas, and they get paid in one day what another person might get in a month. But it also hit people working in tourist lodges, people selling crafts, people who take tourists for village walks…

That puts pressure on the protected areas. When people are hungry and don’t have money, they take a risk and go into the park to hunt.

What other ways can people make money in Bwindi?

Uganda’s known for coffee and gorillas. It’s the largest coffee-exporting country in Africa. We started Gorilla Conservation Coffee, where we give farmers above-market prices for good coffee to reduce their dependence on the park for food and wood. A donation for every bag sold goes to support community health, gorilla health and conservation. We sell the coffee to tourists, expats and Ugandans, and have also started selling it to roasters in the USA, Europe, New Zealand and South Africa. Even during the pandemic, people could still make a living.

Gorilla Conservation Coffee’s part of Conservation International’s Sustainable Coffee Challenge, which is trying to make coffee the first fully sustainable crop in the world. They’re trying to get Starbucks, Espresso and the other big guys to change the way they source coffee. That can be really big for coffee farmers around the world, including around protected areas, so they can make a living.

People also grow tea quite a lot. Honey’s also produced. As long as these products aren’t competing with the forest and people aren’t cutting down trees to put up a coffee farm, it can work.

Are gorillas at risk from coronavirus?

The endangered mountain gorillas we’re working to protect are at direct risk from SARS-COV2, which causes the disease Covid-19. Because we’re so closely related, we can easily make each other sick. That’s why there are strict rules in place. We’re working hard to prevent Covid-19 spreading between people and from people to the gorillas.

What’s the most important thing you’d like to see change in wildlife conservation?

We need to start engaging communities more. In the next 10 years, we need to give communities a lot more power to manage the wildlife in the areas where they live. In some places in the DRC, gorillas are outside protected areas. How can people protect them, if the community doesn’t see any use from them?

We also need more African leaders in conservation. The Western world can help nurture and build these national leaders to top positions. That’s going to help a lot.

Why is African leadership important?

A lot of conservation agencies have been driven from the Western world: US, UK… For some solutions, you need to get the African voice in there. You need people who are living with these species or living in the countries where these species exist in order to have long-term change.

If you’re grounded in a culture, you’re more likely to change the people who need to change. It’s easier for me to convince someone in a local community to stop doing something, like bushmeat hunting, than it is for someone from another country. They might just see them as an outside visitor and think “They’re only interested in the wildlife. They don’t care about us.”

Primates have been studied for decades in Africa but it’s been led by people from the developed world. Whenever you go to a conference on African conservation, you hardly ever see any Africans. You go to a conference where they’re talking about primates in Uganda, and there’s me and one other person; everybody else is from other countries. African voices haven’t always been heard.

We need to reduce that. We set up the African Primatological Society. We had our second conference in Uganda and 85 per cent of people attending were African. It’s usually the other way around. Most presentations were from African scientists.

One Nigerian professor went home and went on the radio and told Nigerians: “We shouldn’t eat our wildlife. We should protect it. Uganda is protecting their wildlife and they’re earning from it.” He was convinced, having seen Uganda’s example, that we can benefit more by protecting our habitats and primates.

Do you think African leaders would have a different approach to conservation?

With Africans, we feel wildlife has to have some use. It’s not just about furry charismatic gorillas or chimps. We want African governments to understand the idea of ‘sustainable use’. It resonates with them better, rather than just saying these are wonderful animals and we need to protect them.

Conservation Through Public Health also work with local people on family planning. Growing populations put pressure on wildlife and protected areas. How important is it to look at population issues?

It’s better for people to have the children they can manage, so they can have a better standard of living. And it’s very helpful for wildlife, because there’s less need to enter the park to poach or get firewood. Even going from 10 children to four makes a big difference.

Is that a difficult conversation for people to have?

Family planning’s actually allowed men and women to talk more to each other. For men, it’s about balancing the family budget. For women, it’s about having more control over her body. A lot of women are very happy they don’t need to have a baby every year. They can do something else with their life. It’s great seeing how it’s liberating women and giving them options.