How to avoid harming animals when travelling 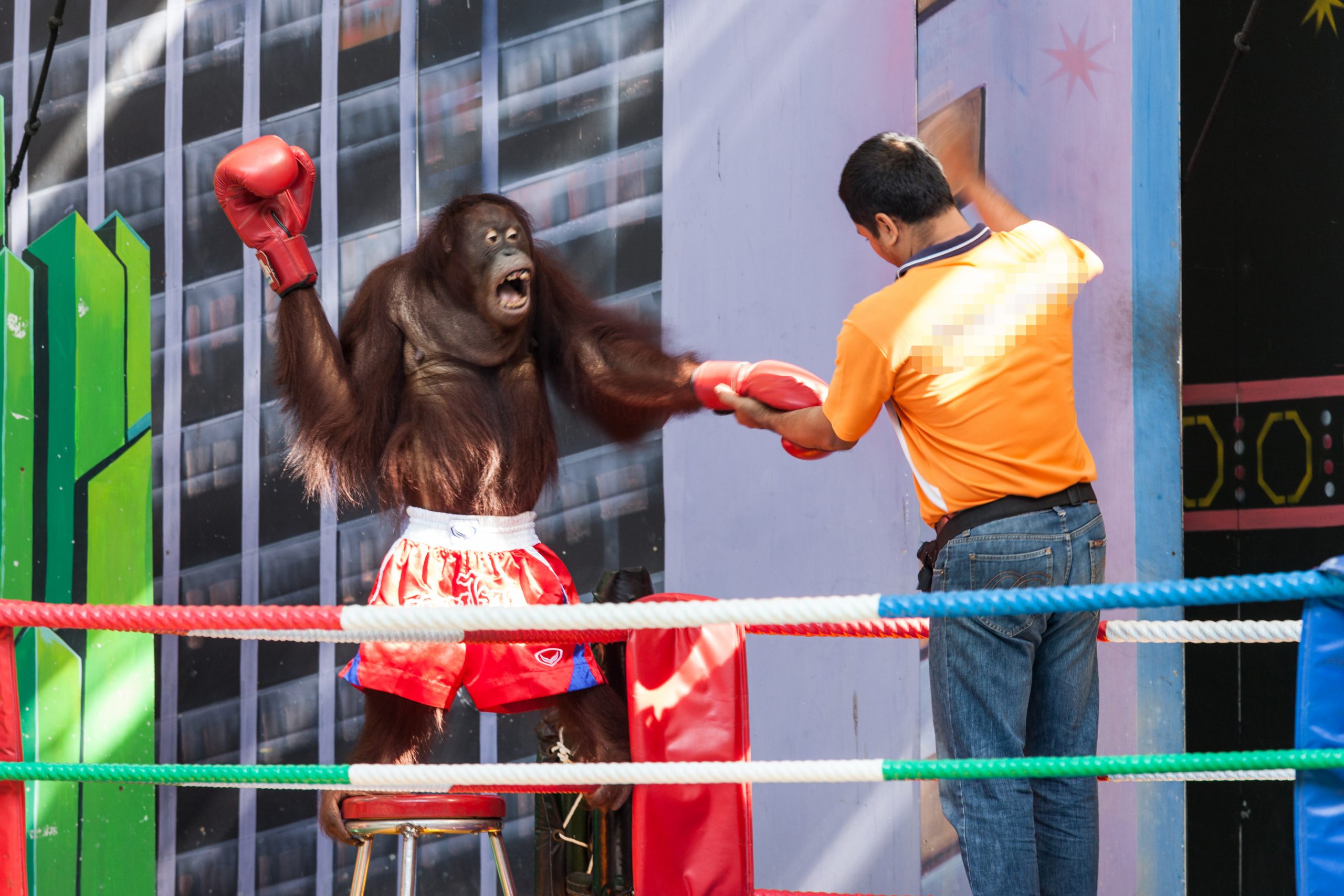 “What might be a once-in-a-lifetime moment for you could be causing a lifetime of suffering for the animal.” It’s a simple message from Katheryn Wise, wildlife campaigns manager for World Animal Protection. But it’s a message that’s often lost, forgotten or ignored by travellers in the excitement of being on holiday.

From animal selfies to elephant rides, tiger temples to dolphinariums, many countries offer travel experiences that might look like harmless fun. The reality often means misery, physical pain, stress, cruelty, mental suffering and premature death for the animals. Just because a dolphin or monkey looks like it’s smiling, it doesn’t mean it’s happy.

“A lot of the problems start because people love animals so much,” Wise explains. “They want to see animals and be as close as possible to them. It’s the invisible side-effects tourists don’t see. They might have one photo with an animal, but they don’t see how it’s fed, where it’s kept, or the fact it’s been taken from the wild.”

A quick, ‘harmless’ animal selfie is usually highly stressful for the animals, which are often mistreated and kept in poor conditions. “Wildlife selfies have been normalized,” Wise suggests. “You can see celebrities having pictures with tigers or elephants, and it’s easy to think it’s ok to do that, without questioning it too much.

“People having selfies with sloths was a big issue in the Amazon. We found a lot of them died within six months of being taken from the wild. They’re living in completely inappropriate spaces. They look very sweet but they’re very easily stressed and just not suitable for being handled by the public.”

For local people, having a cute captive animal to pose with tourists is a big money-maker. Travellers should be aware of the damage they’re doing by paying for a picture. But the rise of social media has seen an increase in wildlife selfies. “People on holiday are a little bit more susceptible because they want that experience and they want that photo for their social media, to show their friends what they got up to on their holiday,” says Wise.

“We did some work around Instagram and we found a huge number of wildlife selfies on there where the animal is kept captive or restrained or bated with food. Instagram now actually have a pop-up box, so if you type certain keywords, such as ‘sloth selfie’, you’d get a box that says, “You’ve searched for a term that may be causing harm to animals”.”

The last time I was in Thailand, I was surprised not only that tiger temples were still open and allowed to operate, but that, despite all the news stories about the suffering they cause, travellers were still planning to go along and pose for pictures next to the animals.

“In the scenario where an animal’s being restrained and drugged so people can pose with them, that’s obviously a problem,” says Wise.” Again, people think when they’re in another country, perhaps it’s ok to go and have a photo with a tiger because other tourists are doing it or a tour operator is taking them there. If it’s a wild animal, it shouldn’t be restrained in that way.

“Once you’ve had your selfies with them, it might be that when the tiger dies, their bones will be used in traditional medicine. It’s an ugly circle of exploitation. Just by taking part in one part of it, you are buying into the whole system.”

All these situations require is common sense. “If you can touch the animal, if you’re holding it or hugging it, then an alarm bell should be going off,” says Wise. “With animals that are chained, your gut tells you that you shouldn’t be there. You should listen to your gut.”

The problem is that, sometimes, people don’t have a very informed or empathic ‘gut’. I’ve seen tarsiers used for selfies in the Philippines and chained-up jaguars on the streets of Mexico. One of the most glaring examples is Jemaa el-Fnaa, the main square in the Moroccan city of Marrakech. It’s meant to have a festival atmosphere, a step back in time to a world of acrobats and street performers.

But the reality is miserable: across the square, limp-looking snakes, defanged and probably drugged, are ‘charmed’ from pots by their owners using musical instruments, while other men walk around with monkeys dressed in garish costumes, chains around their necks, making them jump onto tourists’ heads or shoulders for photos.

It’s big business, but so obviously grim for the animals that it’s shocking to see so many tourists lap it up. “Anything where an animal is performing for the public or dressed in human clothes is a clear sign that animal is being exploited for the tourism trade,” says Wise. “If someone approached you at home and tried to put a monkey on your shoulder, you’d not want to be involved. But sometimes when you’re on holiday, your instincts go out of the window.”

Messages about animal cruelty are getting through, though. Cambodia’s Angkor Wat, the country’s most popular tourist attraction, announced this year that it’s banning elephant rides, as did Dhaka Zoo, the largest zoo in Bangladesh. Travel companies around the world have been pressured to stop selling any tours that involve elephant rides, and there’s a push now to go further, to ban shows featuring elephants and activities, such as bathing.

“In any interactions with elephants, the elephant will have been taken from their mother at a young age, and are likely to have been part of a breaking-in process called the ‘crush’,” Wise explains. “It’s a horrific process where the animal’s beaten and starved and sleep-deprived, so it can be controlled. By taking part in that activity, you’re buying into that whole process. The animal, when you see it, might seem calm, but it’s gone through a traumatic process to get to that point.”

“The acceptability of elephant riding is decreasing,” Wise goes on. “It’s interesting if you look on social media, when you see pictures of celebrities riding elephants, the immediate reaction is “This is not ok. You shouldn’t be doing this,” whereas swimming with dolphins is perhaps still seen as slightly more acceptable. We’re moving towards a place where people recognize that wild animals in captivity used for our entertainment is not the right thing.”

Attitudes towards sea parks and dolphinariums have changed. The 2013 documentary Blackfish, which showed orcas at SeaWorld attacking trainers and other orcas, and experiencing mental illness because of the conditions they were kept in, put a big dent in the popularity and profits of these kinds of venues. Swimming and posing for pictures with dolphins remains popular, though.

“The sad thing about dolphins is their jawlines give the illusion they’re smiling but that’s far from the truth,” Wise says. “They’re free-ranging animals. They can swim up to 30 miles an hour. They have a home range around like 100 square kilometres, and generally they’re kept in tanks that are 200,000 times smaller than their natural range.”

Public opinion can be powerful, and there’s pressure on travel companies to stop selling tours to dolphinariums. “A lot of times it’s argued that it’s educational to see dolphins in a dolphinarium,” says Wise. “But a dolphin jumping through a hoop, that’s not a natural behaviour, so there’s nothing educational about seeing that. And they’re mainly bottlenose dolphins in captivity, which aren’t a threatened species, so it’s impossible to argue it’s for conservation benefits. It’s a facade for entertaining tourists, and when you buy a ticket, you’re buying into that system.”

There are times when the excuse of ‘cultural traditions’ muddies the water in exotic locations. Some travellers go to see bull-fights, cock fights or dog fights; something they wouldn’t consider acceptable at home is treated as ‘experiencing local culture’.

But, Wise suggests, there’s no need to switch off your moral compass when you’re in a different country. “Some of these things, such as bull-fighting, continue because people continue to go to them,” she argues. “Often, they’re designed for tourists to feel they’re taking part in the local culture, but by buying into that, you’re just perpetuating the problem. If you can close that demand, you can stop that from happening.”

There are plenty of ways to see animals that don’t cause them harm, such as animal sanctuaries that care for rescued, injured or endangered animals. Often those places need money from visitors. You just need to research them properly first.

Watching and photographing animals in the wild in national parks, reserves and protected areas also means your money helps to protect wildlife. “Tourism brings a lot of money in, so it can create jobs and alleviate poverty,” says Wise. “And when you see animals in the wild, you get to see their natural behaviours. It’s pretty inspiring. It makes you understand the animals better and care for the natural world.”

The signs are usually there to tell the difference between activities that harm or help wildlife. People just need to look, to think, and to care. “It’s a broken system, and we need to step in and stop it, and say, “Actually, we’re not going to put up with animals being exploited for our entertainment. It’s not ok.” Just think about where the animal has come from, why you’re being offered an experience with it, who is benefiting from that. If the animal’s welfare is being put below your entertainment, just stay away.”