Dr Jane Goodall: “We can heal some of the harm we’ve inflicted.”

The British conservationist on emotional attachments, the future of the natural world and staying hopeful in dark times
By Graeme Green 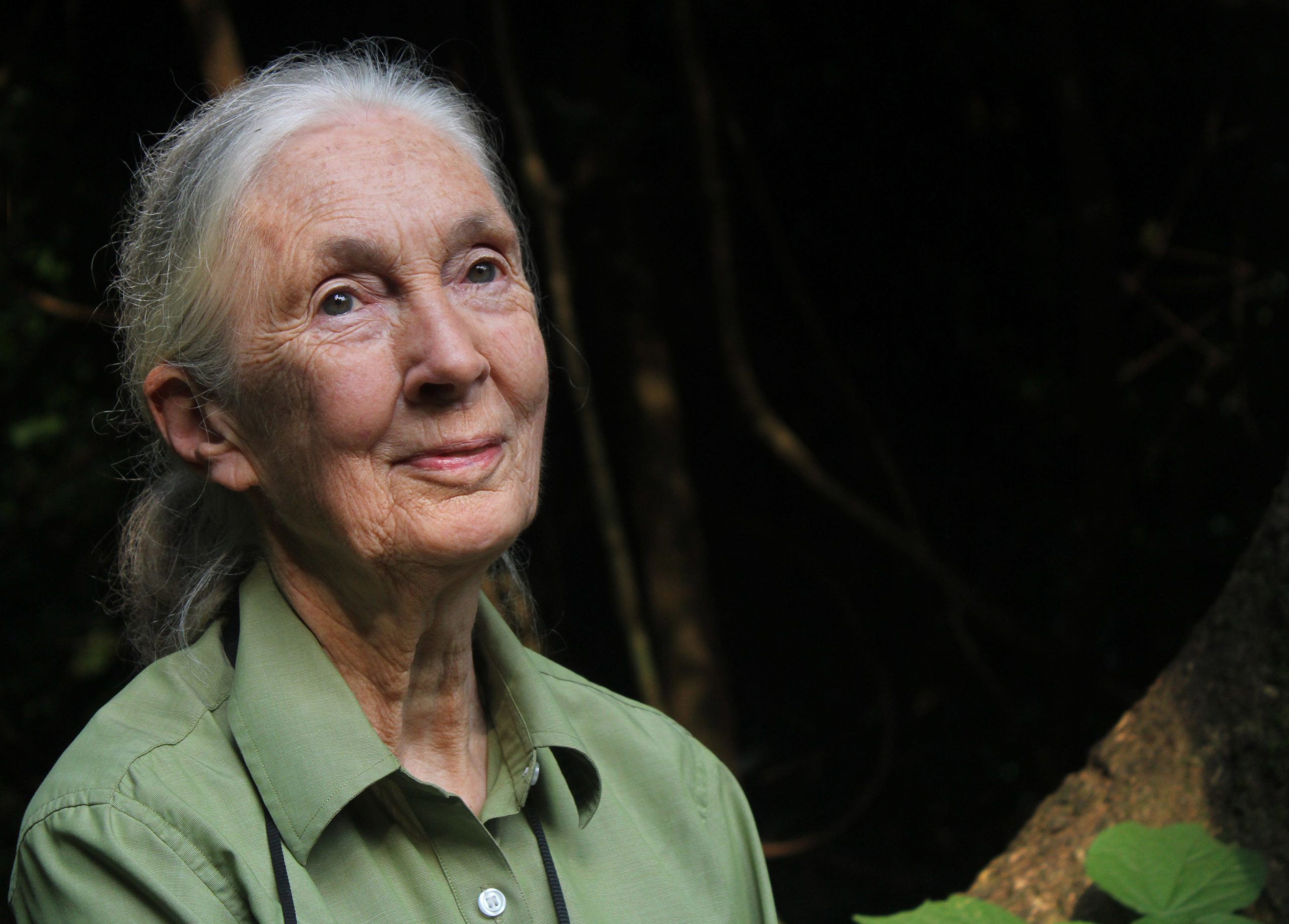 Dr Jane Goodall is a conservationist and anthropologist, famous for her ground-breaking work with chimpanzees since the 1960s. She is the Founder of the Jane Goodall Institute and a UN Messenger of Peace.

Where did your love of wildlife came from?

I was born loving and being fascinated by all animals, and I had a very supportive mother. I was 10 years old when I read Tarzan Of The Apes and dreamed of going to Africa, living with wild animals, and writing books about them.

Everyone laughed at this – we had little money, Africa was far away, and I was just a girl. In those days, girls did not do such things. Men weren’t living in the wild studying animals either in 1944. But my mother simply told me I would have to work hard, to take advantage of opportunities, but not to give up.

What was it that drew you to study chimpanzees?

I went to Africa prepared to study any wild animal. It was my mentor, Dr. Louis Leakey, who asked if I would try and study the chimpanzees of Gombe National Park in Tanzania. Once I gained their trust and got to know them as individuals, each with his or her own personality, observed examples of their intelligence, began to understand their complex social structure, and realized how similar their behaviour was to our own, it became more and more necessary to continue the study. They live 40 to 60 years in the wild, so a long-term study was especially important.

We’re still learning new things, and this year celebrates the 60th anniversary of the day I arrived in Gombe: July 14, 1960.

What are the most important discoveries you made over the last 60 or so years?

The first significant observation was watching chimpanzees using and making tools from grass stems and leafy twigs for feeding on termites. At the time, it was thought that only humans used and made tools.

I described the chimps’ individual characters and their emotions. I saw examples of brutal aggression on the one hand, and love, compassion and altruism on the other. Combined with the biological similarities between humans and chimps, the documentation of chimpanzee behaviour by film-maker and photographer Hugo van Lawick and the detailed observations I and my students were making, scientists were forced to realize that we humans are part of, and not separated from, the rest of the animal kingdom.

Gradually, it became the norm for ethologists to name individual animals they were studying. Originally, I was told they should be numbered and that only humans had personalities, minds and emotions.

The chimpanzee studies led the way to new thinking about the animals with whom we share the planet. It is generally accepted that they are sentient beings, far more intelligent than was thought before. That doesn’t just apply to apes and monkeys, but many other species, including birds and even octopuses.

Did you get emotionally attached to the animals you worked with? Is that a blessing and a curse?

In those early days, I got to know the chimpanzees so well that they were almost like family. Because I empathized with them, I was often able to intuitively understand the meaning of a particular interaction. This was a blessing as I then could examine my conclusion objectively.

The bad part was the terrible sadness I felt when one died, or was injured and in pain, or was grieving the death of a family member. But it is absolutely untrue that empathy prevents objective research.

Are you frustrated at how much damage is being done to animals and the planet by humans?

It is extraordinary that the most intellectual creature ever to walk the planet is destroying its only home. This is happening as our populations grow, as we concentrate on economic growth over protection of the natural world, or destroy the environment because of extreme poverty, so people cut down the last tree, fish the last fish, because they have to try to survive. In some places, we’re already using up more of the planet’s finite natural resources than nature can replenish.

We tend to think of ourselves as separate from the natural world. In fact, we are part of it. As we destroy ever more wilderness areas, we are stealing our children’s future. We need healthy ecosystems to provide clean water, clean air, regulate the climate, and a healthy ecosystem depends on the biodiversity of the area. Each species plays its role in the tapestry of life.

When we look at what’s happening to the world’s wildlife, from poaching to loss of habitat to climate change, it’s easy to feel hopeless. Are you still optimistic that humans will change their behaviour and take better care of our planet?

Indeed, we are going through dark times. Much needs to change. We need to alleviate poverty, address the unsustainable lifestyles of so many people, address human population growth and stamp out corruption. That’s a tall order.

But more people are aware today of the environmental crisis. Climate change is a reality people are experiencing. I believe there’s a window of time when, if we get together, we can start to heal some of the harm we have inflicted, and slow down climate change.

We must protect our forests, plant trees, address the terrible pollution of the ocean, the air and the land. With increased education and empowerment, particularly of girls and women, family sizes tend to drop.

How do you stay hopeful?

What keeps me going is the commitment, energy and passion of young people when they understand the problems and are empowered to think of solutions and take action. The Jane Goodall Institute’s Roots & Shoots programme for young people, from kindergarten through to university, is now in some 60 countries and growing. Young people are changing the world and they’re changing attitudes of parents and grandparents who may be in high decision-making positions.

I’m also hopeful because of the human brain. Incredible technologies, such as solar, wind and tide power, are already helping us to live in greater harmony with the natural world and others that are mind-blowing are being tested. Also, people are beginning to realize that every day they make some impact on the planet, and so they’re starting to make ethical choices in what they buy and how they interact with nature.

Nature is amazingly resilient and places we’ve destroyed can and have been restored. Many animals and plants that were on the brink of extinction have been given another chance.

And then there is the indomitable human spirit – the people who tackle what seems impossible and often succeed. Rachel Carson was a great example, fighting against huge commercial and political interests until she got DDT banned. The black robin of New Zealand was reduced to only one fertile male and one fertile female but Don Merton wouldn’t give up his efforts to save them, and there are some 250 individuals today.

There are so many people today fighting to protect particular species or environments. Of course, they do not always succeed, but there are hundreds of examples of success.

How has your approach to conservation changed over the decades? Many conservation programmes in Africa and around the world involve local people far more than they did in the past, don’t they?

In 1990, I flew over the tiny 14 square mile Gombe National Park and the larger Greater Gombe Ecosystem in a small plane. I was deeply shocked. The park was a small oasis of green forest surrounded by bare, treeless hills.

Until the 1970s, it had been part of a forest belt that stretched across equatorial Africa to the west coast. It was clear that there were more people living around Gombe than the land could support, thanks to the high population growth, and they were cutting down the last of the forest even on very steep slopes in their desperate struggle to grow crops to feed themselves and their families. The land was over-farmed, the soil eroded, the streams silting up during the rainy season.

It seemed obvious that there was no way to protect the Gombe chimpanzees when the people surrounding the national park were struggling to survive. It is the same sequence of events that is increasing poverty and leading to the depletion of natural resources in rural areas in many countries.

So in 1994, the Jane Goodall Institute began Tacare, our method of community-based conservation. It’s a very holistic program that includes restoration of fertility to farmland without using chemicals, water management, reforestation, teaching local people the use of smart phones and so on, so they can monitor the health of their village forest reserves, where most of Tanzania’s remaining chimpanzees live with no government protection.

We also provide scholarships for girls to stay in school past puberty, microcredit opportunities for environmentally sustainable projects, and family planning information. Tacare programmes are now operating in six other African countries around chimpanzee habitats.

The film Jane Goodall: The Hope is premiering on National Geographic and Disney+ at 9pm (EST) on April 22, 2020 (Earth Day).