Jen Guyton: “Photos have the power to make people fall in love.”

The American photographer on meerkats, being charged by elephants and her most controversial photo.
By Graeme Green 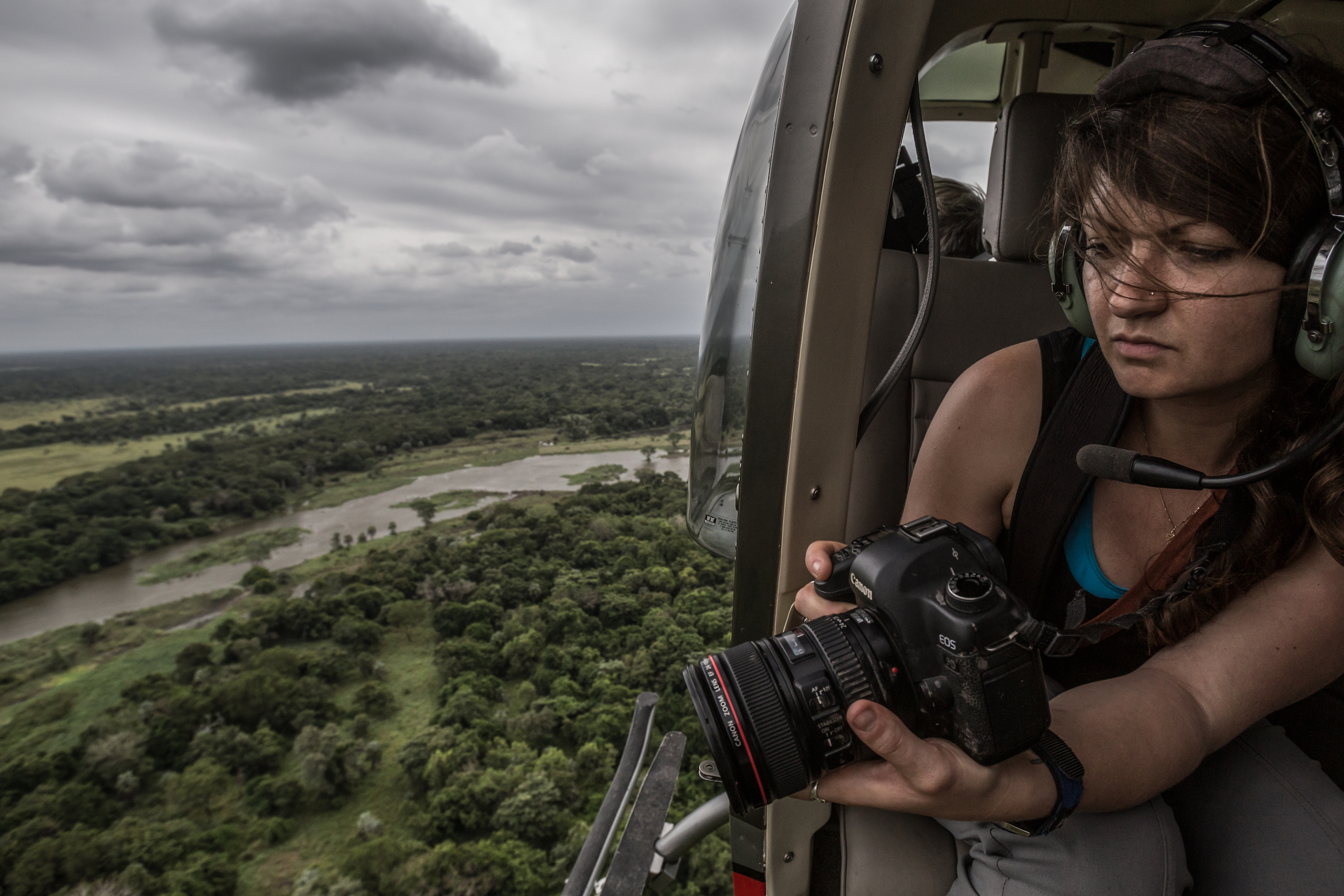 Jen Guyton is a National Geographic Explorer and a Fellow with the International League of Conservation Photographers. She has a PhD in Ecology and Evolutionary Biology from Princeton University. Her work has appeared in National Geographic, BBC Wildlife Magazine, and Biosphere.

How does your science background influence your photography?

I definitely think my background in ecology helps me to tell better stories. My training and experience helps me to understand animal behaviour and to understand how ecosystems work, which makes it easier to identify when something is unusual or interesting. I’m now trying to lean on my background to tell more complex stories about ecology and conservation that will make a difference in the way people see the world.

What do you hope the impact of your photos is?

People will only want to protect what they value and love. I believe photos have the power to make people fall in love, whether that’s with an organism or an ecosystem. I can only hope that my photos will not only move individuals to care more about their environment but also inspire them to action. Eventually, I hope my work will influence conservation policy, too, like how early paintings of Yellowstone led to its protection as the world’s first national park.

Photos can also inform, of course. You can’t love something you don’t know exists. That’s an impact that I know for a fact my photography has had, especially when it comes to pangolins. I’ve gotten dozens of messages over the years from people who’ve told me they’d never heard of a pangolin before seeing my photos. Now many of those people are just as enraptured by these strange creatures as I am. That’s a tangible impact. There’s nothing more satisfying.

You’ve spent a lot of time with meerkats in the Kalahari. What are they like to get to know over time?

Meerkats are incredible creatures. It was amazing being able to walk with them every day for a year and observe their behaviour and social interactions. But what was truly remarkable to me was how, over time, I was able to identify the individuals just by glancing at them. Each meerkat had a slightly different face and body shape, and each one had a personality. It solidified my understanding that animals have wants, needs, and minds of their own, just like humans.

Meerkats are currently listed as ‘Least Concern’, with a stable population. Unfortunately, they’re the exception to the rule. The reality is that most wildlife species, with the exception of a handful, are declining. We’re experiencing a true biodiversity crisis.

What’s the most remarkable wildlife moment you’ve ever photographed?

The first one that comes to mind is also perhaps the most controversial image I’ve ever made. When I was working with meerkats, I came across one of our known individuals who had been impaled with two porcupine quills, but was still alive. I spent a while watching him and thinking about how such a strange encounter could have happened. Ultimately, I concluded that the most likely explanation was that the meerkat started down a burrow that had a porcupine in it. When porcupines are threatened, they’ll back out of their burrow at speed, spines-first, toward the perceived threat. In this case, I think it was our unlucky meerkat.

When I shared this image to my social media recently, as an example of a strange piece of natural history, I was attacked by a number of people who believed I should have helped. When I found the meerkat, I had immediately called the research project manager to see if we could do anything to help him, but we were there as scientists and there was a strict rule to not interfere with nature. Besides, there wasn’t a veterinarian for hundreds of miles around, and I wasn’t sure how to move the meerkat or remove the spines without making his injuries worse. In the end, I’m not sure what happened to the meerkat, but he was photographed looking healthier a week later with only one spine still lodged in his body. I hope he survived that strange misunderstanding with the porcupine.

What’s been your most dangerous moment while photographing animals?

Having a deep knowledge of the animals I’m working with has largely helped me avoid being in dangerous situations. I’ve been very close to venomous snakes, had my bedroom swarmed by thousands of army ants, and had a hippo haul out of the water in the darkness just a few metres from where I was standing. In all of those cases, I knew how to avoid danger and never felt like my life was threatened.

The closest I’ve come to wondering if I might die was one of many times I was charged by an elephant in Gorongosa National Park. Gorongosa’s elephants have had bad experiences with humans. Many of them lived through the Mozambican Civil War and survived periods of very heavy poaching. Some of the park’s elephants still have bullet holes in their ears from that time.

I’d only been working in the park a year or so when I rounded a corner in the road and encountered an elephant in front of me. I stopped the car, then realized I had accidentally driven right into the middle of a herd. In two seconds flat, the matriarch stormed out of the bushes and came straight at me. You can tell if an elephant is mock-charging just to scare you or if they really mean to hit you by the posture of their body and the way they hold their ears. I knew right away that she was serious, so I threw the car into reverse and slammed on the gas.

At first, I started to gain some distance between us, but as the road curved, she just cut the corners and ran across the savanna. She started gaining ground, and I was sure that I was going to become a pancake, either underneath her incredible girth or after slamming backward into a tree. Just as she got to within 20 metres from me, as I was still frantically reversing, she suddenly stopped, threw her head back in a plume of dust, and sauntered back toward her herd. I guess she’d decided that I was far enough away and no longer a threat. I had to pull over for a while and just let the adrenaline roll back.

There have been a few times when I’ve thought about selling the rights to that scene to The Fast And Furious.

The happy ending to this story is that in the five or so years since that encounter, Gorongosa’s elephants have more or less stopped charging cars. As tourism increases and safari vehicles drive the park’s roads more often, they’re starting to trust people again.

Big iconic animals like elephants, lions and gorillas get a lot of attention. Are there any lesser-known animals that you think deserve a bit more attention?

Pangolins, for sure. Pangolins are the best combination of weird and wonderful. They’re mammals that are covered in scales, like a reptile. They have sticky pink tongues that are longer than their bodies. Some species walk on their hind legs and hold their enormous claws in front of them like tiny T-Rexes. And their only defense is to roll tightly into a little armoured ball. They have no close relatives. They’re entirely their own thing.

At the same time, they’re hugely endangered thanks to the wildlife trade. In Asia, they’re coveted for their meat, which is considered a delicacy, and their scales, which are wrongly believed to be medicinal – they’re made of keratin, the same material as fingernails. They’re the most trafficked animal in the world. As a result, all of the world’s eight pangolin species are endangered, some of them critically endangered. It couldn’t be more important or more urgent to elevate these underdogs to the recognition they deserve.

I still meet a lot of people who’ve never heard of pangolins. “No, no, not penguins,” I find myself saying all too often. But I’ve been glad to see that over the past five years or so, pangolins have gained a lot of popularity. I think that’s in no small part thanks to amazing visual storytellers like Katie Schuler and Brent Stirton.

You’ve spent years working in Gorongosa National Park in Mozambique. A lot of the wildlife there was wiped out during Mozambique’s Civil War. How are things in the national park and across the country now?

Gorongosa is a true conservation success story. During Mozambique’s brutal 16-year civil war, which ended in 1992, large animals like elephants, lions and leopards were hunted to near-extinction. More than a decade after the war, the Carr Foundation stepped in and partnered with the Mozambican government to begin the Gorongosa Restoration Project, now known as the Gorongosa Project, which has been a resounding success.

Though some species are still recovering, total animal numbers are about equal to what they were before the war. Some species, like waterbuck, are doing so well that the park is able to give some of them to other Mozambican parks that are struggling to recover. In addition to the success for biodiversity, the Gorongosa Project is working to build capacity and return stewardship of the park to the Mozambican people, and they’re creating a new model for conservation that also helps lift people out of poverty.

Do you have a favourite wildlife photography location?

Probably Namibia. It’s such a starkly beautiful country, with all kinds of fascinating desert-adapted wildlife. There’s also way more variability than one might imagine, from the enormous coastal sand dunes to the haunting fairy circles, from the rocky inselbergs that look like a Mars landscape to the oases of Etosha National Park that are packed with wildlife. I also love the fact that you can drive for hours and hours without seeing a single other vehicle.