From Argentina to Romania, work is underway to restore nature and bring back jaguars, bison and other extinct species…
By Graeme Green 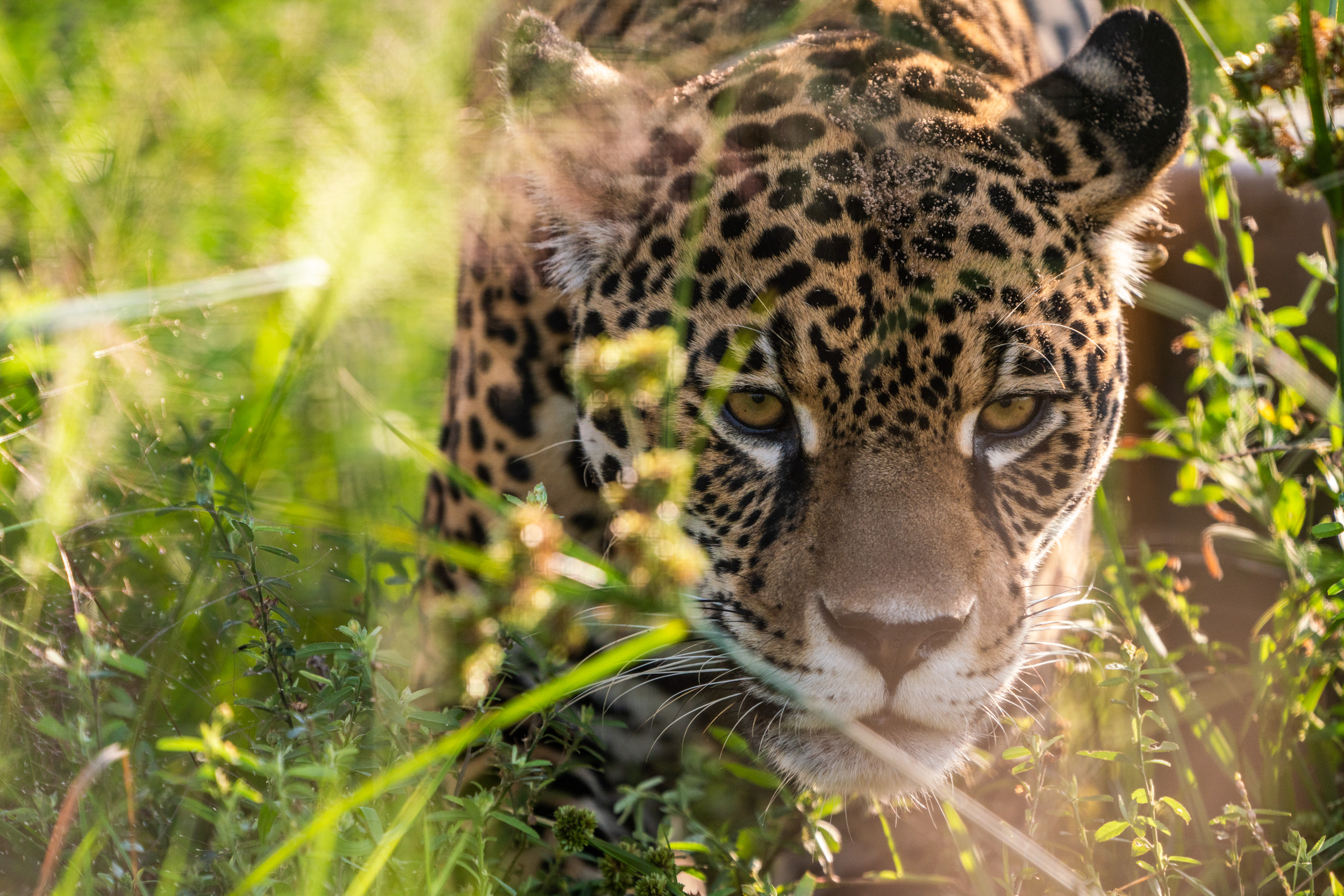 “Seeing the jaguars walk out into freedom was one of the most emotional days of my life,” says Kristine Tompkins, president and co-founder of Tompkins Conservation.

For the first time in 70 years, jaguars – the largest predators in South America – are now roaming free in Argentina’s vast Iberá wetlands. In February, an adult female and her two captive-born cubs were released into Gran Iberá Park. Argentina has only 200 critically endangered jaguars left in the wild. They were last seen in Iberá in the 1930s, before hunting and habitat loss drove them to extinction.

Mariua and her two cubs, Karai and Porã, are the first of at least nine jaguars that will hopefully repopulate the wetlands. “Jaguars are a keystone species, so they’re incredibly important to a fully functioning ecosystem,” Tompkins explains. “It’s a dream for us to see jaguars here again. It also sets a standard for what’s possible in rewilding. It tells us that, given the right circumstances and if the reason an animal went extinct has been removed, you can bring back almost anything.”

The return of jaguars to Argentina’s wetlands is part of a global ‘rewilding’ movement. Animals including cheetahs, lions, black rhinos and African wild dogs are being reintroduced from Mozambique to India in places they’d become locally extinct due to human activity. Scientists have also just identified large areas of potential habitat for up to 150 jaguars in Arizona and New Mexico.

Forests are being restored in Rwanda, Ecuador, Vietnam and Brazil. Protected marine areas are helping ocean life thrive from Indonesia to Belize. Grasslands are flourishing again. Dams are being removed to allow rivers to flow naturally. An alliance of organisations are campaigning for Scotland to become the world’s first Rewilding Nation, with the goal of rewilding 30 per cent of the country’s land and marine habitats, and the possible reintroduction of the lynx.

“The absence of beauty and wildness in our lives means we’re missing a large portion of why our hearts beat,” Tompkins suggests.

But there are also hard-headed reasons to wind back the clock and undo some of the damage humans have caused. “Rewilding can bring a huge amount of benefits for people,” explains Frans Schepers, Managing Director of Rewilding Europe. “It’s giving nature the opportunity to heal itself and bounce back. For people, it means fresh air, drinking water, physical and mental health… all these things nature provides. And nature is one of the best ways to mitigate climate change.”

In May 2021, Rewilding Europe plan to transport 26 European bison to Romania’s Southern Carpathian mountains, joining around 70 bison that have been reintroduced since 2014. It’s part of a mission to create a viable wild population. Bison have also been reintroduced to other countries since the 1950s, including Poland, Ukraine, Kryygzstan, Russia and other countries where they were previously extinct in the wild.

The Carpathian’s forests are already home to bears, lynx and wolves, with bison now back for the first time in 200 years. “We’re bringing back a keystone species to a landscape where it’s been for hundreds of thousands of years, to reignite the natural process,” says Frans. “People think wilderness means forest. But Europe had grasslands, and if we want to keep the richness of original European species, we need big grazing herbivores, like bison, that shape and open up landscapes. They’re landscape architects.”

Rewilding Europe currently operates eight rewilding areas in seven countries, with plans to create ‘coexistence corridors’ in Italy’s Central Apennines mountains to protect Marsican brown bears, an endangered subspecies of brown bear with only 60 animals left. They also hope to bring forest reindeer back to central Sweden and the kulan, a wild ass found in Steppe regions, back to Spain.

But rewilding is about systems, not single species. “People associate rewilding with bringing species back,” says Frans. “But we work with assemblages of species. To restore a place, you need species that interact in the landscape. One area we’ve worked in is the Danube Delta, on the border between Romania, Ukraine and Moldova, where we’re restoring nearly 100,000 acres of wetlands that were drained and turned into polders for farming, which failed. We’re restoring a lot of those former wetlands, which will be filled with pelicans, white-tailed eagles and rich wildlife.”

Tompkins Conservation has helped protect 14.5 million acres in South America’s southern cone. For nearly 30 years, Kristine and her late husband Doug have been buying up land, restoring it to nature and returning it to the governments of Chile and Argentina. They’ve helped create 13 national parks in Chile and Argentina, including Pumalin, Corcovado, Yendegaia, Patagonia, Monte Leon and Iberá.

The wealth that funds their work came from clothing businesses they founded (The North Face, Esprit and Patagonia), a former life that Doug later came to see as a ‘mistake’. “I was just part of the problem, producing a load of stuff nobody needed, helping pump along the consumer society, which is undoing nature and contributing to the environmental crisis,” he told me, when I met him in Chile in 2015. “I said “I’ve got to start working on the solution, rather than being part of the problem.””

There are now plans to reintroduce Darwin’s Rhea in Patagonia National Park, which were near extinction locally, and to expand protected territories in Patagonia and Cerro Castillo National Park to help huemul deer, the most endangered large mammal in the southern hemisphere, which are down to just 1700.

In Iberá, the newly freed jaguars will live alongside recently reintroduced red-and-green macaws, which had been extinct across Argentina for 150 years. They’ll soon be joined by giant river otters, a top marine predator that’s set to be reintroduced, which were also extinct in Argentina.

Jaguars are also being brought back to Argentina’s Impenetrable National Park. Cubs were recently produced in a first-of-it’s-kind breeding programme, with a wild male and a captive female from a zoo. The infants will be raised by their mother in an enclosure in the park until they can be set free in a couple of years.

“I believe all life has intrinsic value,” explains Tompkins. “It’s about an emotional love of imagining a place really functioning as it should, like wolves in Yellowstone or Iberian lynx in Spain. Once you dedicate yourself and your teams to a certain region, you figure out who’s missing and make decisions to try to unwind that.”

The rewilding process isn’t always frictionless. “It’s new,” says Kristine. “And there’s an inherent suspicion that conservationists don’t care about people, that they only care about the non-human world, which, with us, is patently not true.

“Have we had pushback to our projects? My God, in the early 90s, we were considered the couple who cut Chile in half, because we were buying up large tracts of forest and not cutting down trees. There’s always criticism. But our model has always been to give the land back to the country as national parks. We’re not putting a big lock on the gates and keeping it to ourselves. Of course, there are conflicts. But usually it’s something like a rice farmer who’s illegally taking water out of the Iberá wetlands.”

Rewilding successes – in Africa, Asia and elsewhere, not just Europe and South America – now pave the way by showing that wildness benefits local people. “I look at rewilding as an economic driver,” explains Kristine. “There are 10 communities around the Iberá wetlands and all of them have been ignored. It was considered to be a flat uninteresting place. With the jaguars, there’s now tourism. It’s also bringing back local pride and the possibility that children don’t need to move away to get jobs. If local communities don’t benefit, 50 years from now those places could be gone.”

Not everyone wants to live alongside wildlife, especially big cats. Farmers in South America have been known to kill jaguars, who are seen as a threat to livestock. “There’s always concern,” agrees Kristine. “But the Corrientinos in Iberá have for hundreds of years found in the jaguar their personal spirit – brave, independent… – so they were very enthusiastic. But generally you have to do a lot of work to make sure the animals are safe. Everyone has to adjust when you bring a top predator back.”

In Europe, too, not everyone wants to live in a wild world. “We have a big wildlife comeback happening in Europe, including beavers, eagles, deer, pelicans… But we don’t imagine everyone will be waving and cheering,” admits Frans. “There’s a beaver in my village in the Netherlands; some people are complaining and others enjoy it. It’s about rediscovering how we can live alongside these species after 200 or 300 years.”

Highlighting the human benefits is a big part of persuading people. Restoring forests to capture carbon could help keep the world below the international 1.5 degree target of the Paris Agreement and mitigate the impacts of climate change.

Frans is also keen to dispel the notion that conservation puts nature and wildlife above people, that rewilding will be bad for business and against local interests, such as farming or forestry. “It’s not about wilderness where no one can go,” he argues. “We want to show it brings jobs and huge opportunities for regions in Europe that have suffered from land abandonment or rural depopulation. Millions of hectares of land are being abandoned. But wildlife and wild landscapes can be the basis for a new economy. Bison, for example, are a big draw card for the local economy in Romania.

“Tourism is just one example, which is a huge economic sector. There are other business models in forestry, private estates, wildlife management… It’s the same conversation with climate. People say the energy transition will cost jobs. But if you look at the calculations it will actually provide more jobs than the oil and gas energy. We don’t need to earn money all the time by destroying things.”

Many Western countries, including the UK and the United States, have dire records in terms of destroying nature and wildlife through hunting, agriculture, deforestation and industrialisation, many of the economic activities that countries in Africa, Asia and Latin America are now being asked to hold back on. Developing countries have an opportunity to avoid the same level of damage and develop more greener economies, while rewilding in developed countries is one way the global inequality can be redressed.

“Rewilding’s becoming a global movement,” he adds. “Everyone realises we need to restore nature because our systems are broken. Look at how nature is crumbling in Africa and wild animal populations are suffering. We want to demonstrate this new vision. We don’t have the illusion that everyone is clapping. But 10 years ago, no one was talking about rewilding in Europe and now it’s all over the place. We want this thinking to become part of the mainstream.”