Elusive, enigmatic snow leopards face serious threats to their existence. Losing them would be a failure of humanity…
By Dr. Charudutt Mishra, Executive Director of the Snow Leopard Trust 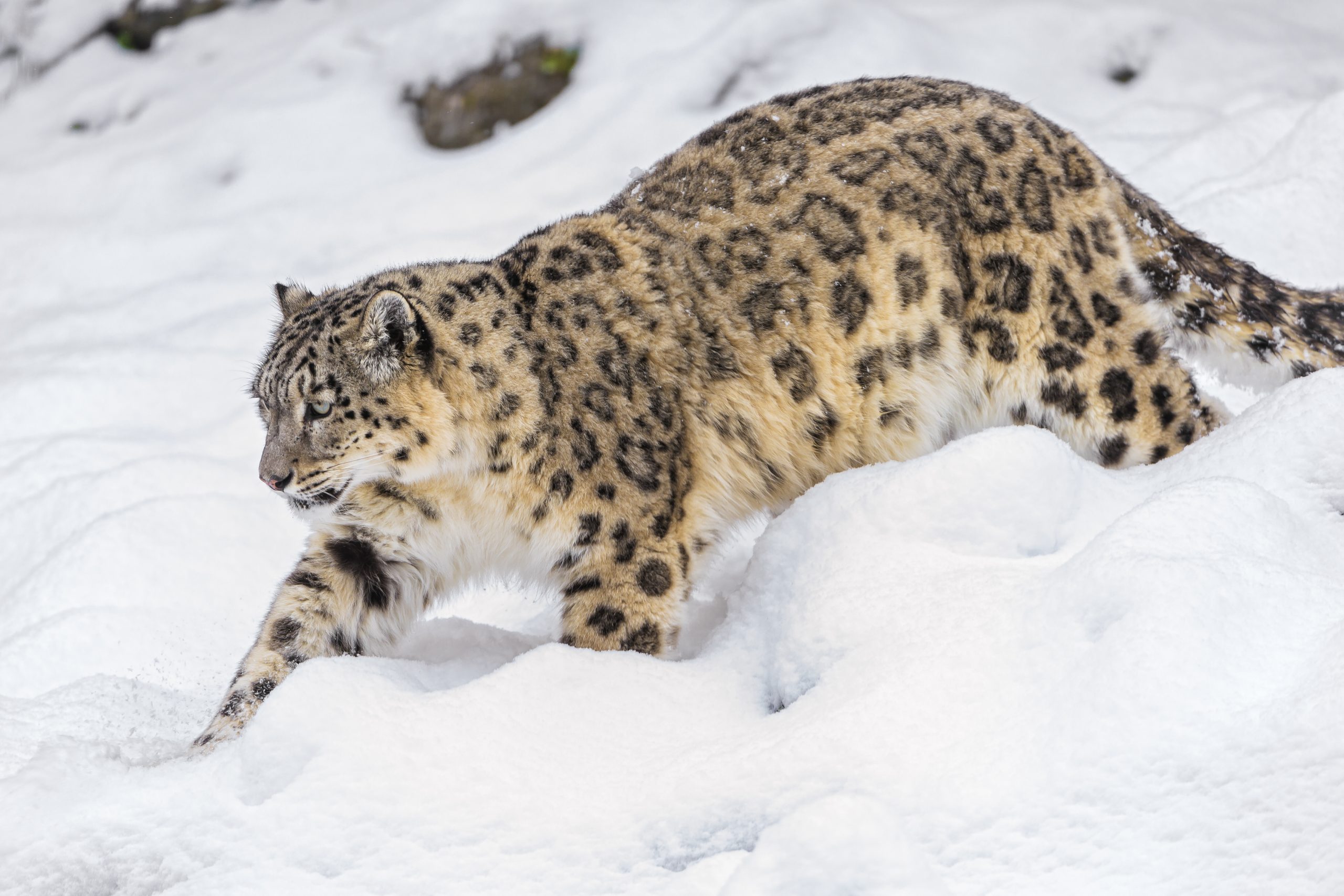 The first time I saw a snow leopard in the wild was a life-changing experience. I’d just fallen into a cold, fast-flowing river, and had escaped with minor injuries. On the way back, there was a long climb up a very steep slope. Every few minutes, as I would stop to catch my breath, I scanned the opposite slope looking for any kind of movement. Then, in a flash, a rock moved.

It was a snow leopard, my first sighting in the wild. It had come after 10 years of searching the Himalayas, trying to see one, which only made it even more magical.

Every snow leopard sighting is special, but I’ll never forget that first time. Someone in my group said I should have jumped into the river 10 years earlier and I wouldn’t have had to wait so long.

Snow leopards have been found in ancient rock art in large parts of Asia’s high mountains, and they continue to fascinate people around the world. There are many reasons why, not least the incredible grace and skill with which this animal thrives in one of the coldest and harshest landscapes on Earth, and for its sheer beauty and power. It is so difficult to see or study, due to its low density, faultless camouflage, and the harsh environment, which has helped it acquire the label of being a mythical ghost cat. Snow leopards are also believed to the protector of Himalayan Shangri Las or ‘sacred valleys’.

These elusive cats live in the high mountains of South and Central Asia, their habitat ranging across 12 countries, including Afghanistan, Bhutan, India, Mongolia, Russia, and China. China actually contains up to 60 per cent of all snow leopard habitat. Despite an estimated range of two million square kilometres, an area the size of Mexico, there are thought to be just about 4000 to 6500 snow leopards left in the wild currently, though we don’t know for sure.

In the Himalaya, where I got my first sighting, snow leopards spend time seasonally at altitudes of up to 5000 metres above sea level. They like remote rocky terrain with lots of outcrops and ravines, which provide good cover and helps them hunt.

Many people might assume that because the snow leopard lives in such remote areas, it is safe and untouched by the problems many other species face. But human populations are expanding. Infrastructure and access is improving, opening up once-remote habitats to the ecological pressures of development and generally increasing the intensity of threats to the species.

There’s an increase in livestock populations to cater to global demands for food and an increase in goats that arereared to produce cashmere. As predators, snow leopards will sometimes kill livestock, and the cats are sometimes killed in retaliation against predation. This has always remained a big issue, not just for snow leopard conservation, but also for the livelihoods and wellbeing of local herding communities.

There’s also a degradation of habitat and a reduction of wild prey, with the hunting of wild sheep and goats in many areas, or excessive grazing by livestock, which in turn impacts snow leopards negatively.

This local persecution has traditionally tended to form linkages with the larger illegal trade in fur and bones. Over the last decade or so, pressures from more organized poaching in trade networks appears to be increasing, catering to illegal markets for fur and traditional medicine. There have been periodic attempts to also start trophy hunting programs, which have, thankfully, been largely thwarted successfully so far.

Mining and other unsustainable exploitation of natural resources, reaching deeper into remote areas, also increases the threats to snow leopards and their habitats.

Enabling local communities to coexist more amicably with this predator is the only way to protect snow leopards. We’ve worked on initiatives that include predator-proofing of livestock corrals, community-managed livestock insurance programmes, and creating livestock-free ‘wildlife reserves’ on pasture land. Those types of local conservation efforts have led to an increase in wild populations.

Snow leopard-focused tourism, especially wildlife photography tourism, has also become a good source of income for local people in some areas, such as in northern India. Building respectful relationships with local communities is central to our work, so we can collaborate and implement programmes that help people to earn a living, especially initiatives that strengthen local economies and engage women.

Climate change will bring new challenges. The cats are resilient. Rather than the direct effects of global warming and climate change, indirect effects are likely to impact them much more. What will be the consequences of climate change for the grasslands and wild prey populations, for example? If wild prey species decline, snow leopards will suffer. Similarly, how will warming, combined with improved access, impact the ecosystem? Will we see a greater threat of new and emerging diseases? These are all very legitimate concerns, but remain open questions so far.

What we do know is that the Earth would be a much poorer place if we lost this icon of our high mountains. It would be a failure of humanity. We would have let down our planet. Our future generations would never forgive us, so we must do all we can to save the snow leopard.