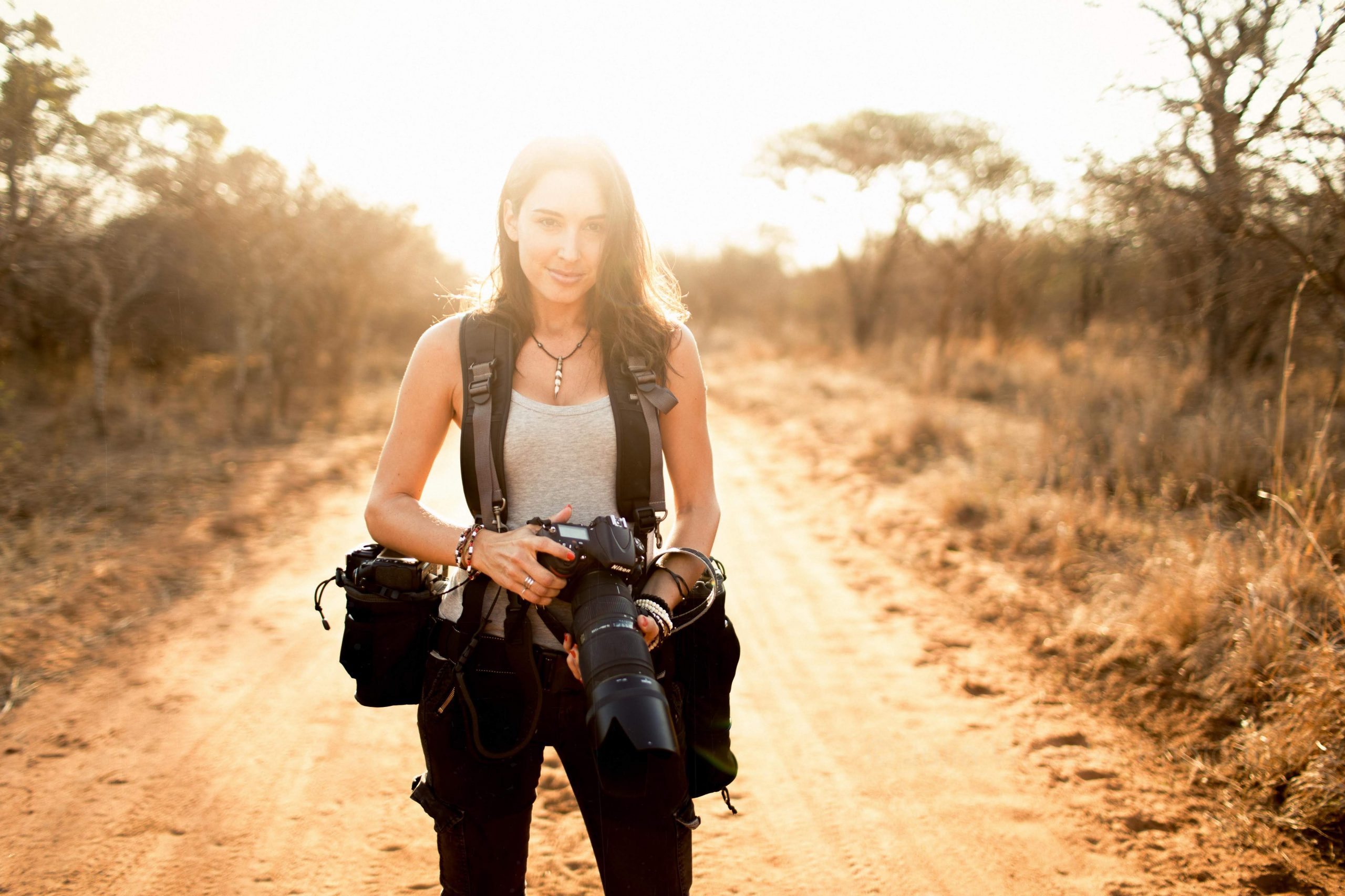 Shannon Wild, also known as Shannon Benson, is a film-maker, photographer, cinematographer and author. She’s worked with organisations like National Geographic Wild, WildAid and the United Nations. Originally from Australia, she’s now based in South Africa, near Kruger National Park.

I’ve seen video footage of you with a bleeding arm, punctured by teeth marks. Does that kind of thing happen a lot?

Thankfully not. I have been photographing and filming wildlife for about 16 years and I’ve only had a couple of encounters. But every now and then, I make a mistake and pay the price for it.

You made a mistake, in this case, with a cheetah?

Yes. It was definitely my mistake. It was a habituated cheetah at a sanctuary. She was used to her handlers and people she sees every day, but not necessarily outsiders,. I was just too in my head about trying to set up my shots properly. It was a very hot morning, so we knew she’d probably run after the lure one time, so we had one chance to capture it. The pressure was on and I ignored very clear warning signs and body language that she was giving.

I was so focused on getting my shot set up. I crouched down while she was behind me and immediately became prey size, and she just went for the opportunity in front of her. She attacked me. She went for the full kill bite-hold, thinking she had my throat and she was suffocating me.

Luckily for me, my ear went down to my shoulder and protected my neck. She ran in thinking that’s where my neck should be, but it was my arm. She crushed my arm and did quite a bit of nerve and muscle damage. But luckily for me, it wasn’t my esophagus, which would have been a whole different story and I definitely wouldn’t be here talking to you today if that was the case. It definitely a wake-up call for me.

If we were looking for a silver lining: at least you now have a real understanding of how a prey animal feels to be attacked by a big cat.

Yes. I actually take a bit of comfort from that because when I’m filming kills in the wild, knowing my own experience, I immediately went into shock. The adrenaline kicked in and there was absolutely no pain. It was about 20 seconds that she was on there, but the pressure of her bite, it was almost like my arm was going to explode from that pressure, but otherwise there was no pain. I didn’t feel the teeth or any of that stuff until afterwards. That pain kicked in nicely later. But, at the moment, I was in so much shock that I just didn’t feel any pain. I take comfort that that hopefully is the prey perspective.

Have you had any other close calls from working with wildlife?

The cheetah situation was definitely the most significant to date. I did manage to break my back on a documentary film shoot early last year. While not directly related to an animal, but it was while filming an animal. I’ve had little bites here and there, and infections – all the fun of working in the wild.

Proximity is a difficult balance, isn’t it? Because wildlife photos do often look better the closer you are, rather than far off in a safari vehicle.

Yes, it’s definitely a balancing act. It’s also very much about the individual animal, even within species. Different animals have different life experience, so every boundary is going to be different for each animal. You have to learn to read that body language and respond accordingly. I always consider risk and weigh up my options.

One of your most recent projects was filming and photographing a rare black panther in India. Was that a challenge?

It was very tough. That project went on for about 18 months of filming. It’s a one-hour special which is on Nat Geo Wild – people should be able to do a search to find it. It’s called the Real Black Panther.

We were based in India for those 18 months. My goodness, that cat is elusive. The entire forest we were filming in which was 600sq km and there is one individual that is black. He is technically a melanistic leopard – black panther is like a blanket term that’s used for any big cat that has the recessive gene, which is melanism.

He is the only one in that forest that has this melanism, a beautiful black individual, and in the right light, you can actually still see his spots, a this black-on-black pattern. Trying to film an entire documentary in an incredibly dense jungle in India, it was not my easiest assignment.

An assignment like that must take a lot of patience.

Yes. There is plenty of wildlife in that forest, so it’s not like we didn’t have anything to film each day, but we have to take it from the perspective of building a compelling story.

There was a one point where he disappeared for two months, and we’d go out every single day, every day, all day, looking for him, and he made absolutely no sign. We were worried he actually had been killed, or had left the area. It was early on, in the first six months of filming, so we didn’t have anywhere near enough to make a full documentary, We were very nervous and I managed to break my back on that film shoot, so it was a very challenging project.

But it’s incredibly special to have that experience, even to just have seen or documented him once, let alone to get to do it over such a long period.

You’re based in South Africa, where there’s been a lot of work done to protect rhinos from poaching. How is that going?

We have white and black rhino here, both of which are endangered, so it’s always really special to get to see them.

There are very high poaching rates here, certainly higher for rhino than elephant, whereas in other African countries, elephants is more of an issue. The area I live in, near Kruger National Park, is a hotspot for rhino poaching. I’m exposed all the time to the statistics and knowing the particular regions where these animals have been poached. I’ve seen and documented that. There is still a long way to go in Africa.

We suffer from a lot of government corruption here, to the point where sometimes they don’t even try to hide it. That is a difficult area that would need to be addressed before any real change could happen because a lot of things get covered up, or poaching kings get protected or they don’t get prosecuted. The amount of money that is being made – everyone wants a piece of it.

The good thing is there’s a lot more publicity on it now and people are being uncovered in positions of power that are involved. Change is coming, but its slow and, unfortunately, the rhinos don’t have a lot of time. We need to be much faster.

As with elephants, people are always surprised about how quickly the numbers are going down. Are you hopeful rhinos will be saved?

I’ve already seen one species of rhino go extinct and that’s the northern white rhino, which a lot of people might have known. Sudan was a very famous rhino. Amy Vitale documented the northern white rhino species a lot in Kenya. She is amazing and brings such widespread attention to these kinds of issues. I was lucky enough to meet Sudan before he passed away and that was very special.

We humans are a bit slow on the uptake. There’s so much that really has to be done. There are really great anti-poaching organizations working really hard and putting their life on the line to protect these animals. That definitely gives me hope. The black rhino, we don’t have many. I really hope there’s going to be an upturn for them in their population. It’s tricky because they don’t reproduce in large numbers. It takes a long time. It’s like elephants: long gestation periods and usually one baby at the time, and maybe one every five years for rhinos. The poaching is overtaking their levels of reproduction, so we need that tipping point to go the other way.

Shannon Wild: New Big 5 podcast
On being attacked by a cheetah, rhino poaching, breaking her back on assignment, and the real black panther
Articles 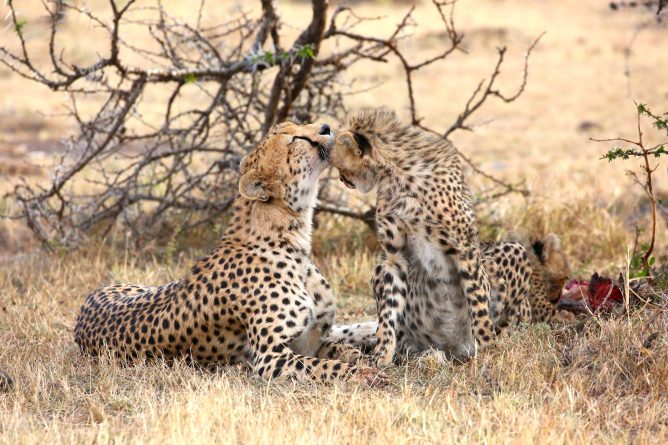 Silent extinctions
The world’s tallest and fastest animals are disappearing, as are many other species. They need urgent action
Big 5s