Thandiwe Mweetwa : “Women have a different style of leadership”

The Zambian conservationist on predators, women in conservation, the impact of COVID-19 and facing down lions
By Anna Tolan 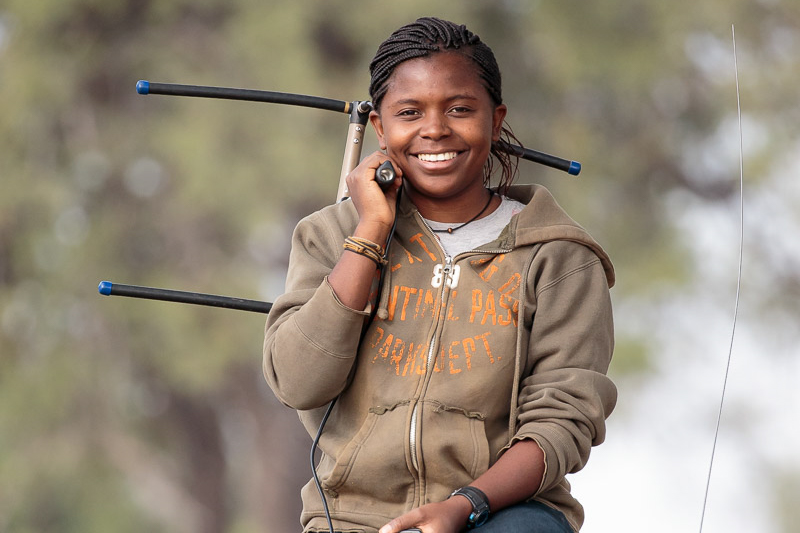 You grew up in a town in southern Zambia, where there was no wildlife. How did you develop your interest in wildlife and conservation?

Initially, it was from the stories my mother used to tell me when we lived in the town of Mazabuka. She grew up next to South Luangwa National Park and she always had stories about this area. It was so interesting to hear about elephants as big as houses and ears as big as table cloths coming into the village. Although, of course, that wasn’t true, it drove my imagination.

When we moved to Mfuwe, the first animal I saw was a baboon and I was really excited. When we were able to watch wildlife documentaries on television, the whole extended family would line up to watch them and I found them fascinating. The uncle I stayed with in Mfuwe was a safari guide and he’d come back from work with stories. There was a well-known leopard called Alice and he’d tell stories about her which I loved.

Along with living alongside animals, I wanted to learn more about them, which mostly came from being in my school Conservation Club and trips to the Chipembele Conservation Centre where I learnt about the natural world and how to take care of the environment. From there my interest in wildlife grew and grew.

What’s the appeal of working with big cats and other carnivores?

We know they’re apex predators that are critical for the function and structure of ecosystems, which are beneficial for the wellbeing of humans and all living creatures on the planet.

But beyond the ecological standpoint, predators just inspire an extra level of fascination and interest. Lions invoke an incredible fascination. They’re incredibly lazy during the day, then there’s that transformation as soon as dark falls into incredible, powerful hunters at night. According to our traditional stories, hyenas are stupid animals and bring bad luck, but they’re so much smarter than everyone thinks they are. Leopards are by far the most graceful of the cats.

Then there are wild dogs. We should all try to be more like wild dogs. They work hard, they take care of each other and they have an amazing level of responsibility towards their family group.

What are some of the main threats to lions? And what can be done to protect them?

The threats vary from place to place but they include the illegal bush meat trade and indiscriminate snaring; prey depletion, so carnivores have less food, which can impact on their physiology and the population; loss of wildlife corridors, which results in them having to cross ‘minefields’ to get to the next area. In certain places, we’re seeing more trading in body parts popping up.

There is also human-wildlife conflict, especially with lions, and there may be retaliation from local people, much of which is never documented.

In terms of solutions, you have to try a combination of techniques because unfortunately there isn’t one solution for most of these problems. These include education, research, law enforcement and community engagement. Each of these on their own doesn’t work but together they can.

Have you ever had any dangerous encounters with lions?

I try very hard not to. Dangerous encounters have been kept to a very minimum. The key is watching their behaviour closely and how they’re responding to me or the vehicle.

But the first and only serious encounter I’ve had was when I started volunteering with ZCP. It was my first day and we went to immobilise a big male lion to fit a tracking collar on him. For some reason, the dart malfunctioned and didn’t discharge all the drugs. He’d fallen in the open and was lying in the sun, which is quite dangerous, as lions can’t control their temperatures. Four people put him on a stretcher and were going to carry him to the shade. But he woke up earlier than anticipated, so they gently put him down.

Being the youngest and the shortest I was told to pick up a few things and take them to the car. But I stepped on a twig and he turned in my direction. I was told to stay still and be quiet. We had a staring contest for maybe three minutes or so with just 3 metres between us. Eventually, he lost interest and I was able to walk away.

How has COVID 19 affected wildlife and people in the area you work in?

This area of Zambia, Luangwa, depends on a thriving tourism industry but it has come to a grinding halt so there’s not as much money in people’s hands. In terms of wildlife, we’ll just have to wait and see what that translates to. We’re in a place that has just had a really harsh rainy season with extra pressure from natural causes, such as floods that completely damaged people’s food stores.

There’s also not a lot of money around, so poaching is predicted to increase as the dry season progresses. We don’t yet know at what level. I haven’t seen any direct evidence of that yet as when poaching shoots through the roof you normally see a lot of number of snared carnivores as well. Typically, in any year, snaring starts to increase in the dry season, which is when people’s food stores are running low.

It’s also easier to set snares around water holes that are drying up, and right now, from the groups of carnivores we’re monitoring, we haven’t seen any significant increase in snaring. It’s too early to tell, and there are less vehicles in the national park, so less sightings of snared animals may be being reported.

What lessons can we learn from the COVID crisis? And what would you like to see change in future?

The COVID crisis has been a clear indication that we need to look at wildlife trade laws and how they’re enforced. There’s legal and illegal trade but the line of differentiation is not that clear, so having more enforcement with wildlife trade laws might help prevent future pandemics.

From the public health standpoint, we’re lucky that, so far, we haven’t experienced it in Zambia as bad as we’d expected. The public health sector needs strengthening to be better prepared for pandemics. The tourism industry also needs to diversify and put measures in to cushion such events when they happen. NGOs also need to consider funding and review sustainability measures.

Why do you think it’s important to get more women involved in conservation?

There are not really many women working in field-based conservation. I was the only woman in the field-based operations here for years until I was able to start the Woman and Wildlife Conservation programme. What that does is diversify who’s on the team, with different angles of looking at issues.

Being able to give that opportunity to women who had an interest in wildlife research but no idea if they could do it is what the programme’s been about. There are women who are being trained to be part of the team long-term and also internships for students who want to get experience of field research. They’re trained on a whole range of work within ZCP, such as research and education, so hopefully they can find their niche.

Women have a different style of leadership and balance the team up. They can be more approachable and have more compassion when balancing the needs of both people and wildlife, especially if you talk of human-wildlife conflict and alternative livelihoods.

What would you like to see happen in the future with conservation?

We have to change what comes to mind when we say the word ‘conservation’. What most people think of is rangers with guns arresting people, or it’s just about wildlife and that’s it. We need to change conservation practice so that when you say ‘conservation’, you think of something more holistic. That involves striking a balance, with benefits for both people and wildlife.

It would mean a big shift from how we fundraise, particularly influencing what donors think is important to fund. Donors will happily fund law enforcement services and wildlife research but not many are interested in funding reducing the cost of living with wildlife for communities.

We need to move towards not just having conservation associated with law enforcement. It might take a while because even in government agencies it’s the same and they don’t invest much in human-wildlife conflict. We all need to recognise that it’s hard to live with wildlife.

What would you say to a student considering wildlife research as a career?

Number one is being passionate about the field and having an understanding of where your work fits into the bigger picture of conservation. It’s hard work, and if you’re not ready for that it can be pretty horrible. You’re out for long periods of time, sometimes working through the night. And there’s a lot of tedious deskwork to process the fieldwork so you can say ‘OK, so what does that look like on the map or in percentages or proportions?’

When you get into research, you also need to be aware that other parts of conservation are involved, so you won’t be just collecting information about animals. The work you do has to translate to on-the-ground conservation, short-term and long-term.