Tim Laman: “All hope is not lost.”

The American wildlife photographer Tim Laman on orangutans, life in the trees and his most difficult assignment
By Graeme Green 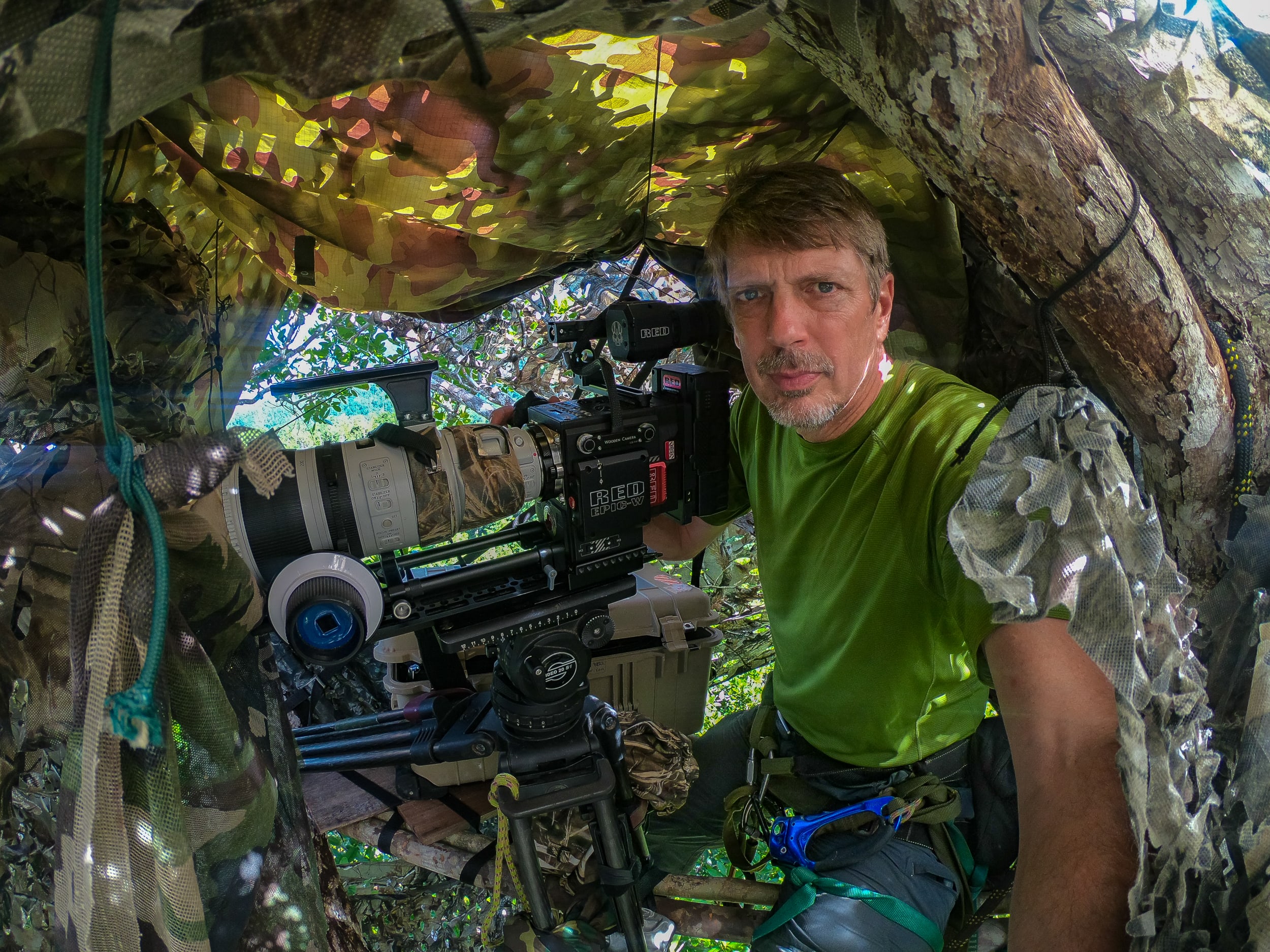 Tim Laman is a photojournalist, cameraman and field biologist who’s worked on extraordinary photo shoots from Antarctica to Indonesia, including his famous photo of an orangutan high in the canopy that won him the 2016 Wildlife Photographer of the Year award. His work can be seen in National Geographic magazine and on Nat Geo, BBC and Netflix. He’s also a Fellow of the International League Of Conservation Photographers.

What was it that first got you into wildlife?

I got interested in nature and exploring the outdoors when I was a teenager, and simultaneously developed an interest in photography. I took my first real wildlife photo when I was in high school. I volunteered to help with a project ringing black kites, and I got to climb up in a tree to a nest and helped put a band on a chick. I had the chance to take some pictures of this amazing bird up-close.

You were climbing trees right from the start?

I was. I certainly enjoy the exploratory aspect of getting up into trees, especially in the rainforests around the world, where there is so much life up there to discover and you know you’re the very first person that ever got up that tree.

You’ve worked on photo assignments that have required complex planning and long periods of time. Is that a necessity to get the kind of photos that you want?

I want to get images of species that haven’t been well-photographed, to try to tell stories about the lesser-known species, and that often involves going to pretty tough places and putting in a lot of effort and time in the field to capture unique moments.

What’s been the most difficult assignment?

My work on the Birds of Paradise has been the most challenging. New Guinea, where the Birds of Paradise are found, is remote and hard to get to. It often requires a lot of bush planes and trekking in the mountains just to get to a location. And you have to have a lot of luck to have females come and males doing their thing, so you get the full display. Some of them were extremely frustrating, and I never got what I wanted.

But I find it very satisfying to be able to document the display behaviour in a new way or capture images of a species that maybe are famous, in the sense people have heard of Birds of Paradise, but they haven’t really seen the images of how they behave in the wild.

How much time and work did your famous photo of an orangutan high in the canopy in Borneo take?

I’m very fortunate in that my wife Cheryl Knott is a primatologist. She’s been studying orangutans in Borneo for over 25-years at this research site in western Borneo in a place called Gunung Palau National Park. I’ve been also doing research and photography projects there, along with Cheryl’s orangutan project. It has been the biggest long-term project of my career.

From the very early years, I realised I was missing a type of image of orangutans by always being on the ground following them with a telephoto lens. I was missing a wide angle shot of an orangutan in its habitat, in the forest.

I tried rigging up cameras over the years. But orangutans are so smart, so they always saw the lens and avoided them. In 2015, I decided to try using several really small Go Pros at canopy level with wireless connections to controllers on the ground. There were two orangutans who came back to this isolated tree several times, which had a fruiting fig,. Over several days, I climbed up the tree to change batteries, change the angles, play with the shot. Eventually, one of the orangutans climbed up just where I hoped on the tree trunk. I was able to capture that image showing the rainforest and the orangutan climbing up towards the camera.

It took a lot of work but it was worth it.

How satisfying was it to look at the results?

It was really exciting. It’s always tense when you’re reviewing the images from a remote camera on your laptop, in the field, after climbing a tree and bringing the memory card down. I remember I sort of let out a whoop of excitement with my assistant there, as we glanced through the images.

Orangutans face severe threats in Indonesia and Malaysia, as do other species, from loss of habitat to palm oil plantations and logging. How bad is the destruction that you’ve seen?

I’ve been going to Borneo in Indonesia for over 30 years. There’s been a huge change in the amount of forest. In the area where we primarily work, which is now protected as a national park, it’s still in good shape. But the surrounding areas, which were largely forested, there are huge proportions of those converted to agriculture in the last 30 years including, oil palm and other crops. It’s frustrating and sad to think about the rainforest that’s been lost.

If you look at the numbers of the decline of orangutans, there are various projections of what percentage has been lost in the last 50 years. If you draw a line, it looks like it’s going straight down towards extinction in the next 20 years. That is very disconcerting.

I remain a bit more optimistic than some because I see a growing improvement in Indonesia, in terms of protecting the remaining protected areas, like the national parks. There’s a lot more effort being put into controlling illegal logging. With Gunung Palau, aerial photo shows that the forested areas that were heavily logged have recovered.

I feel encouraged that Indonesian people are getting more focused on protecting the remaining forested areas. I think that this curve, which looks like it’s steeply dropping down towards extinction, is going to flatten out as people get serious about protecting the remaining areas. And there are good chunks of habitat like Gunung Palau which has probably about 5000 orangutans. My wife Cheryl and I are working closely with her NGO, and with the authorities and Indonesians, to protect their landscape. Even though it sounds really grim, all hope is not lost.

Apart from orangutans, what other animals live in these rainforests?

Borneo has incredible diversity of wildlife. It’s one of the oldest rainforest areas in the world. In Gunung Pulau, there are 240 species of birds, including eight different types of hornbills, thousands of species of plants. There are five species of cat, including the little leopard cat, clouded leopard, marbled cat… They can all be found in this one lowland forest in Gunung Pulau.

You’re one of only a few photographers to have photographed the newly recognised Tapanuli orangutan. What was that experience like?

I was really fortunate back in 2015 to be able to go to the Batang Toru Forest where this new species of Tapanuli orangutan was described. It’s hard to describe the feeling when you’re out in the forest in a really remote place. It’s really difficult to get good views of them, but we found one big spectacular male Tapanuli orangutan, and I got some good shots of him.
Knowing he’s one of just a few hundred of that species of great apes left in the world, it was just a real sense of privilege being there and also the responsibility of getting some good images and explaining the story of the species. Mixed emotions there.

The world’s wildlife is facing many serious threats currently. Are you hopeful for the future?

Yes. Things are not looking great right now but I do have hope for the future. I believe we can turn things around. You can’t be a conservationist if you’re not an optimist at heart. I feel that we just need to keep working. I’m encouraged by things like the people in Indonesia. I’ve seen a huge change in the last 30 years that I’ve been going there in terms of awareness about environmental issues, their pride in their wildlife. So it’s about voting in leaders who take leadership in environmental issues

I’m a big supporter of American biologist E.O. Wilson’s proposal that we should work towards setting aside half of the Earth for the rest of the species. Right now, I think it’s just over 20 per cent of the land and oceans that are under protection status. We have a potential to increase that. Especially as people are concentrating more in cities, we can set aside a lot more space on the planet for long-term coexistence. I think we can strive for that long-term goal of setting aside 50 per cent for the rest of the planet. 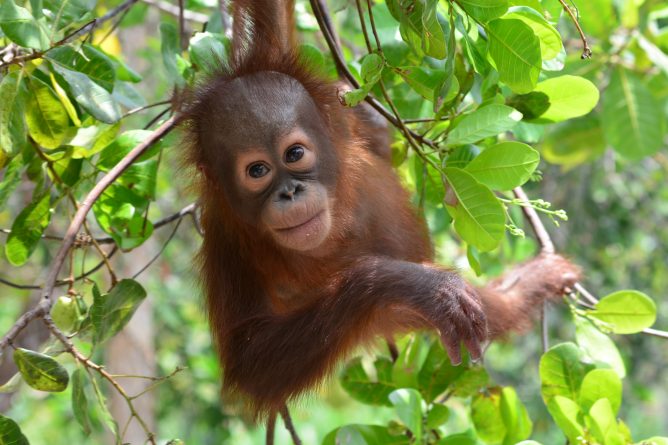 Everything you need to know about orangutans
The 'people of the forest', from massive cheek pads to frugivorous diets