A new report on biodiversity, climate and pollution shows we’re heading for disaster. Is it possible to turn the tide?
By Graeme Green 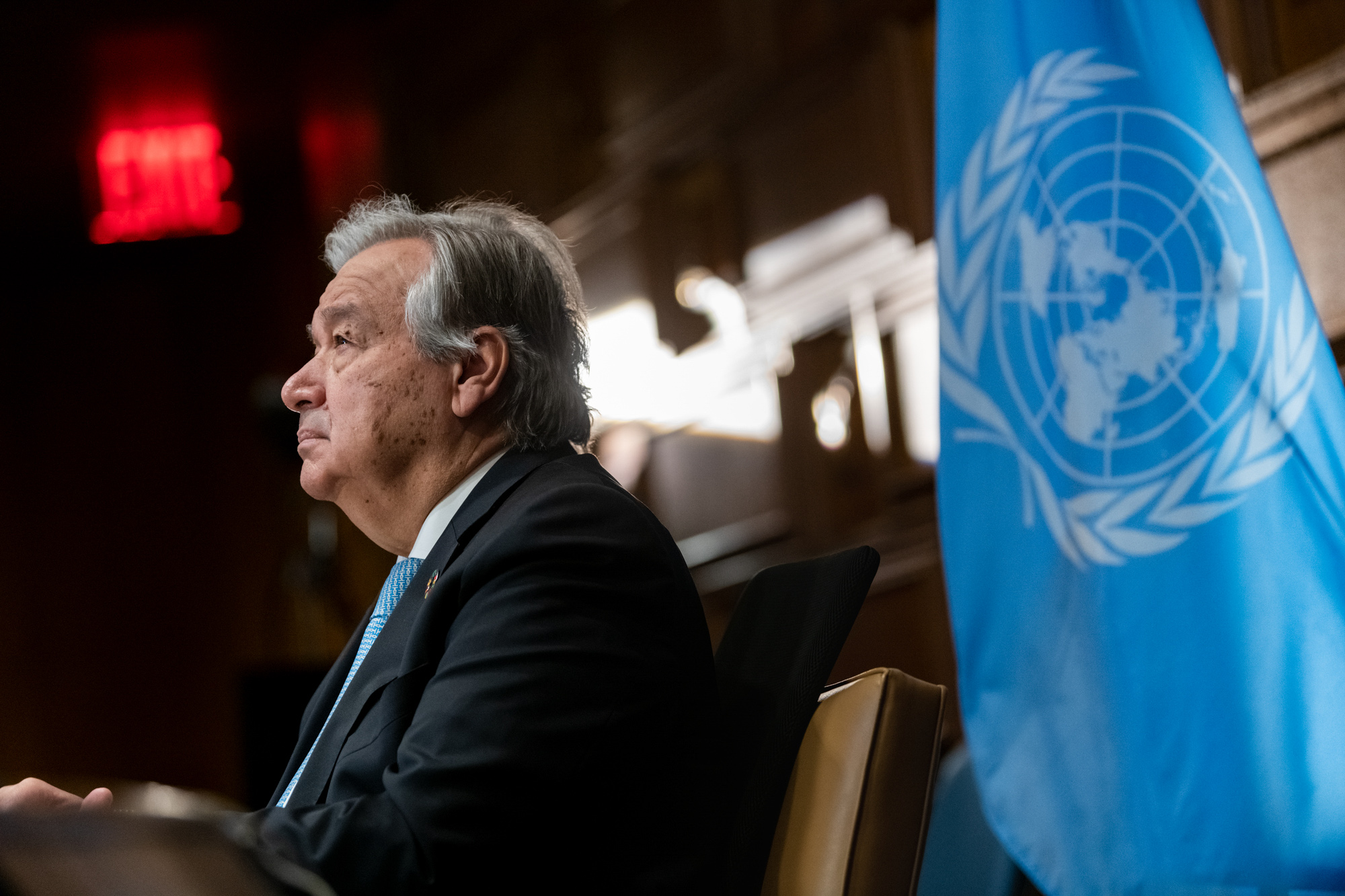 “Humanity is waging war on nature,” according to UN Secretary General António Guterres. “This is senseless and suicidal. The consequences of our recklessness are already apparent in human suffering, towering economic losses and the accelerating erosion of life on Earth.”

A new report, Making Peace with Nature, just released by the UN Environment Programme (UNEP), lays out the grave impact on the Earth, wildlife and humanity from the combined triple-threat of climate change, biodiversity loss and pollution.

In it, scientists point out that society is failing to meet most of its commitments to limit environmental damage. The world is not on course to fulfil the Paris Agreement to limit global warming to well below 2°C above pre-industrial levels. Despite a temporary decline in emissions due to the pandemic, Earth is heading for at least 3°C of global warming this century. At the current rate, warming will reach 1.5°C by around 2040, possibly earlier.

More than one million of the estimated eight million plant and animal species are at substantially increased risk of extinction. And diseases caused by pollution are currently killing around nine million people prematurely every year.

People around the world are suffering from the harm we’re causing. Over the last 50 years, the global economy has grown nearly five times larger, mainly due to a tripling in the extraction of natural resources and energy to damaging levels that’s creating a planetary emergency, alongside increased consumption and production. Economic growth has brought wildly uneven gains and losses to the world’s population, which has doubled over the last 50 years to 7.8 billion people; though average prosperity has doubled, around 1.3 billion people remain poor and around 700 million hungry.

Environmental degradation is impeding progress towards ending poverty and hunger. The burden of environmental decline disproportionally impacts on the poor and vulnerable, and looms even larger over today’s youth and future generations. Producers and consumers in wealthy countries often export their environmental ‘footprint’ to poorer countries through trade and the disposal of waste.

The planet’s capacity to sustain the growing of nutritious food, clean water and sanitation will continue to weaken in the face of ongoing environmental declines, increasing the effects already experienced by many vulnerable and marginalized people. For example, food security is threatened by the loss of pollinators and fertile soil.

The report sets out how climate change, biodiversity loss and pollution (air, water…) are connected. For example, small increases in temperature, along with associated changes in weather, rainfall, extreme heat, drought and fire, increase the risks to air quality, health, food security, water supplies and human security. In 2018 alone, damage from climate-related natural disasters cost around US$155 billion (£111 billion).

“By bringing together the latest scientific evidence showing the impacts and threats of the climate emergency, the biodiversity crisis and the pollution that kills millions of people every year, this report makes clear that our war on nature has left the planet broken,” says Guterres.

The news isn’t good. But the report suggests the tide can be turned if drastic action is taken. Decades of incremental efforts haven’t stemmed the environmental decline resulting from an expansive development model because vested and short-term interests often prevail. Only a system-wide transformation will achieve well-being for all within the Earth’s capacity to support life, provide resources and absorb waste. This transformation will involve a fundamental change in the technological, economic and social organization of society, including world views, norms, values and governance. No more ‘business-as-usual’.

The report’s authors call for a clear break with current trends of environmental decline. 2021 and the coming decade are crucial. And given the interconnected nature of climate change, loss of biodiversity, land degradation, and air and water pollution, Earth’s environmental emergencies need to be tackled together.

Transforming humanity’s relationship with nature is key, with the report pointing to the importance of human knowledge, ingenuity, technology and cooperation, which can transform societies and economies and secure a sustainable future.

The risks to human well-being and the failure to achieve the global Sustainable Development Goals will continue to escalate unless environmental degradation is halted. Global warming of more than 2°C, combined with continued loss of biodiversity and increasing pollution, will have dire consequences for humanity.

The costs of inaction when it comes to limiting environmental change far outweigh the costs of action.

The report calls for the limiting of global warming to well below 2°C above pre-industrial levels and pursuing efforts to further limit the temperature increase to 1.5°C requires rapid implementation, as well as a significant strengthening of pledges under the Paris Agreement. Globally, net carbon dioxide emissions need to decline by 45 per cent by 2030 compared with 2010 levels.

The loss of biodiversity can only be halted and reversed by providing spaces dedicated to nature, while also addressing causes of biodiversity loss, including overexploitation of resources on land and at sea, climate change, pollution and invasive species. To prevent extinctions and maintain nature’s life-supporting contributions, the conservation and restoration of biodiversity needs to be integral to how terrestrial, freshwater and marine ecosystems are used. There also needs to be an expanded and better-managed global network of interconnected protected areas.

Among the many changes needed, the report calls for major shifts in investment and regulation around the world to produce transformative change and power the shift to sustainability. Governments should incorporate the value of nature into decision-making (and incentivize businesses to do the same), rather than focusing purely on GDP. They should also put a price on carbon, phase out harmful subsidies, and redirect some of the +US$5 trillion in annual subsidies to fossil fuels, non-sustainable agriculture and fishing, non- renewable energy, mining and transportation towards supporting low-carbon and nature-friendly solutions. Investments in nature-friendly solutions and technologies in areas such as water and food production can help mobilise the investments needed to attain the global Sustainable Development Goals.

Shifting taxation from production and labour to resource use and waste is important to promote an economy that detaches prosperity from pollution and favours job creation. Developing countries need more support to address environmental challenges, including access to low-interest finance. Reducing inequalities and the risk of social conflict from environmental degradation requires steps to promote equity and address individual and community rights to property, resources and education.

The responsibility for all this doesn’t just fall on governments and big business. A sustainable future will require the participation of the private sector, financial institutions, labour organizations, scientific and educational bodies, and media, as well as households and civil society groups. Every person is urged to be part of a global transformation by learning about sustainability, exercising their voting and civic rights, changing their diets and travel habits, not wasting food and resources, and reducing their consumption of water and energy. Human cooperation, innovation and knowledge-sharing can and should create new social and economic possibilities and opportunities that generate shared prosperity and well-being as part of a sustainable future.

The COVID-19 pandemic and the economic crisis it’s produced show the grave risks from ecosystem degradation and the abuse of nature. The pandemic should be seen as an opportunity to rebuild in better ways and to change direction. “Before the COVID-19 pandemic, 2020 was emerging as a moment of truth for our commitment to steer Earth and its people toward sustainability,” says Inger Andersen, UNEP’s Executive Director. “Momentum was building and global meetings were set to discuss bold action on the three interconnected planetary crises facing humanity: the climate crisis, the nature crisis and the pollution crisis. These crises, driven by decades of relentless and unsustainable consumption and production, are amplifying deep inequalities and threatening our collective future.

“2021 must be remembered as the year we took it upon ourselves to ensure that the pandemic is remembered not only as a human tragedy, but as the moment when people reconsidered their priorities as individuals and societies, and took to heart the fact that safeguarding the health and well-being of current and future generations means safeguarding the health of our planet.”

To read the report, see www.unep.org/resources/making-peace-nature

Other photos by Graeme Green (unless otherwise stated): www.graeme-green.com